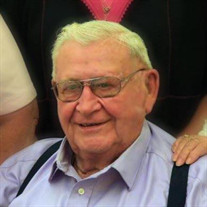 Edwin “Bud” Walter Ruff Passed on April 2, 2020 in Boise, Idaho. Born July 15, 1928 in Ruff, Washington to Parents John and Paulina Schmauder Ruff, brothers Raymond Nathaniel, Robert J, Ruben Harold and sister Ester Alma. He was named after a brother Walter Edwin whom had passed away at the age 5. Bud attended school in Ruff and Wheeler Wa. achieving his GED early due to the necessity of working on the family farm. Both sets of his grandparents were from Russia, who had moved to Germany and then immigrated to Washington State in 1900. The town of Ruff Washington was named after his grandfather, Godtfried Ruff in 1911. His family were dry land wheat farmers. Bud was always a jolly fellow, when he was quite young his brothers put him in a carriage and pushed him down the hill. Realizing there was a fence at the bottom of the hill they took off running with Bud squealing. They were able to catch up and stop him before he was hurt. Bud rolled out with a look on his face saying “why did you stop me”? Bud married Jean Price Ruff October 15, 1950. Bud served in the Army in California for a short period of time before returning to the family farm that he loved. Besides working on the farm Bud would do custom spraying for fellow farmers. Bud also worked at Full Circle and Columbia Bean. In 1955 they moved into “town” Moses Lake. On November 22, 1956 the couple welcomed “Daddy’s little girl” Cheryl Lynn. She would be his coconspirator in crime, dance partner and the joy of his life. Some of his interests were tinkering around with cars. His cars of choice, Mercury and Lincoln. As for trucks, Ford was the only type to have. He loved his Allis Chalmers tractors on the farm. He was a skilled mechanic and could go out to his shop and fix any problem. Learning from his time on his family’s farm he became a jack of all trades and he liked to cook and make wine. Bud was an active member in the Elks, Eagles and VFW. He enjoyed having a good time, playing pool, and dancing at the Elks lodge. In October 1977 Bud’s little girl, Cheryl married John Guffey. Bud is survived by his son in law John A Guffey, nephews Harvey Ruff, Don Ruff, and Dennis Ruff, niece Ruby Ruff Keenan and numerous great nephews and nieces along with many dear friends. He is preceded in death by his loving wife Jean and daughter Cheryl Lynn Guffey. Due to the current restrictions we will forgo a funeral. Bud will be interred at the Guarding Angles next to his wife and daughter Friday April 10. We know many people loved Bud – we ask that you take a moment to thank our Lord for the blessings we have and to have had Bud in our lives.

The family of Edwin "Bud" Walter Ruff created this Life Tributes page to make it easy to share your memories.