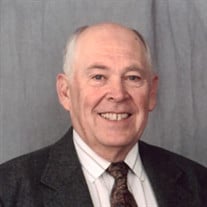 Edward Marshall Wilkinson went to be with our Lord and Savior on Thursday, August 11th, 2016 after suffering a stroke. During the brief hospitalization following this event he was compassionately cared for by the staff at Samaritan Healthcare and was surrounded by his loved ones as he passed peacefully from this world into Heaven. Edward, affectionately known as “Butch” in his earlier years, was born on May 10th, 1941 in Akron, Ohio to Woodrow and Leona “Evelyn” (Brady) Wilkinson. After graduating from high school, he joined the United States Air Force, and was eventually stationed at Larson Air Force Base in Moses Lake, WA. During his time of service in Moses Lake, he met the love of his life, Cheryl Schmid, and they were married on July 31st, 1965. Ed and Cheryl enjoyed 50 years of love and dedication to one another, and welcomed five children into their lives. They moved several times early in their marriage while Ed continued in the Air Force. After honorably discharging from the service in 1968, Ed and Cheryl resided in Seattle where Cheryl worked as a teacher, and Ed pursued his education at the University of Washington. Ed and Cheryl moved back to Moses Lake in 1973, when Ed accepted a position as a laboratory manager at what was then American Potato Company. He continued in various managerial positions at the company until his retirement in the late 1990’s. Ed came to know and love Jesus Christ as a result of the example and testimony of Cheryl and he accepted Christ as his Savior shortly before their marriage. From that point on his commitment to his faith was a hallmark of his life. Ed and Cheryl were active members of several Baptist churches in the community, finally making the First Baptist Church of Soap Lake their church home in 1987. They continued to faithfully worship and serve there for the remainder of their lives. Ed’s life passion was his family, which was always his priority, along with his love for the Lord. Woodworking, a hobby that multiple family members have benefitted from in the form of various beautiful handmade pieces of furniture, was an activity he enjoyed for many decades. Ed was preceded in death by his parents, Woodrow and Evelyn, his dear wife of 50 years, Cheryl, his older sister Ellen, and his infant daughter Trisha Ann. He is survived by two sisters Jackie Clelland and Nikki Scott, his children Chandra (Michael) Lindberg, Thad (Jennie) Wilkinson, Kimberly (Adam) Sackmann, and Jamie Wilkinson. He also leaves behind 14 cherished grandchildren, two delightful great grandchildren, multiple nieces and nephews, as well as many true friends who became near and dear to him throughout his lifetime. Ed had a huge personality and an equally huge heart. His ability to forgive along with his generous spirit were among his best qualities. He will be deeply missed by many, but we are comforted to know that he has transitioned to a place of perfect peace and love. Graveside services will be held at 10:00 AM on Thursday, August 18th, 2016 at Guarding Angels Cemetery with a memorial service to follow at 11:30 AM at First Baptist Church of Soap Lake with Pastor Andrew Schopf officiating. In lieu of flowers, donations may be made to Crossroads Pregnancy Resource Center. Please sign the online guestbook at www.kayserschapel.com Arrangements are in care of Kayser's Chapel of Memories.

Edward Marshall Wilkinson went to be with our Lord and Savior on Thursday, August 11th, 2016 after suffering a stroke. During the brief hospitalization following this event he was compassionately cared for by the staff at Samaritan Healthcare... View Obituary & Service Information

The family of Edward M Wilkinson created this Life Tributes page to make it easy to share your memories.

Edward Marshall Wilkinson went to be with our Lord and Savior...