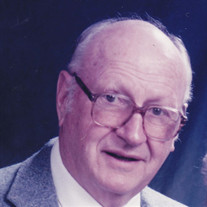 Edward Eugene Gordon December 3, 1927 – June 23, 2019 Edward Eugene Gordon was born to James and Margaret O’Sullivan-Gordon on December 3, 1927, in Pine City, Washington. His siblings include Martha, Helen, Marie, Harold, John and Mary. He grew up on a wheat ranch in the Palouse. Ed graduated Pine City High School and enlisted in the US Marine Corp at the end of World War II. He then began his studies at Gonzaga before being recalled for the Korean conflict. He was a Purple Heart recipient. He returned to Gonzaga and received his degree in business administration and then moved to Warden to work for Columbia Producers until he was able to farm his own land. In 1967 Ed went on a mission for the Catholic Church to Lima, Peru where he taught business skills. There, he met Rita Godlewski. They married in 1969 and returned to Warden to start their married life. They were blessed with three children: Margaret Irene, Mary Elizabeth, and Kathleen Frances. He was a city councilman and involved in parish council teaching religious education for Queen of All Saints parish in Warden. He rarely missed he daughters’ sports games, and will be remembered for his love of God, his family, farming, Gonzaga basketball, Notre Dame football, Rita’s cooking, and playing morning cribbage with his friends over coffee at Corral Restaurant in Warden. Ed passed away on June 23, 2019 at the age of 91. The family would like to thank Dr. Kubosumi and his staff, Brookdale Hearthstone, and Hospice for their care. Ed’s service will be held Friday morning at Queen of All Saints Catholic church in Warden with a viewing at 9:00 am, rosary at 10:00 am, and Mass of Christian burial beginning at 11:00 am. Those wishing to make a donation in honor of Edward may do so at either St. Jude or Haiti Godchild Mission

The family of Edward Eugene Gordon created this Life Tributes page to make it easy to share your memories.