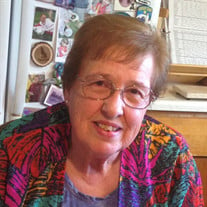 Edna Irene Jones (Smith) went to heaven’s gate on September 7, 2019 in Puyallup, Washington. She fought a hard and brave battle with lymphoma. Her one true love, Frankie was holding her hand as she was welcomed by Jesus. She is preceded by her parents Fannie Irene Smith (Harmon) and William Curry Smith, her brother Curry Dean Smith, and her sister Wilma Jean Saunders of Wenatchee Washington, and her dog Fireball. She is survived by her husband and one true love Frank Wilbur Jones of Moses Lake Washington, her siblings Glenna Marie Atkins of Springfield Missouri, Lowell Smith of Wenatchee Washington, Roy Leslie Smith of Vancouver Washington, and Anna May Steele of Wenatchee Washington. She is also survived by children Frank Casey Jones of Pasco Washington, Pamela Irene Harris of Bonney Lake Washington, and Willian Samuel Jones of Williamsfield Ohio, and her dog Daisy, as well as her nine Grandchildren; Casey, Zachary, Alexander, Cody, Shayla, Ethan, Keyan, Elliott, and Samantha and two Great Grandsons Chase and Owen, whom she loved and cherished through the last 26 years. Edna was born in Wenatchee Washington at Saint Anthony’s Hospital on August 30, 1941. She is one of seven siblings, being the eldest sibling of the family. During her adolescence, she lived with Leotta and Charlie Smith for two years in order to complete her High School education which she did successfully. She Graduated from Eastmont High School in Wenatchee, Washington. Edna later met Frankie at a church bible camp in Wauconda, Washington where it was love at first sight. They would soon after wed on October 1, 1960 in Wauconda Washington in Okanogan County, and two years later begin their family. They were blessed with three children, Frank (Joann), Pamela (Patrick), and William (Amy). They made their life in Moses Lake, Washington. It was in Moses Lake where their family grew in both love, and volume. Anyone who knew Edna, knew of her delicious strawberry jam (which she made her family every year), and extensive holiday baking. Edna never showed up to a holiday event with less than three pies, at least a dozen cookies, and some cookie salad. Through Edna’s life, she served her church whole heartedly. She sang in the church choir, taught Awana for years, and was present for nearly every Sunday service. She attended the First Baptist Church in Moses Lake, Washington. She is known throughout her church as someone who always greated you with a warm smile and sincere hug. If you ask her Grandchildren, they will tell you that the warmest hugs came from “Grandma Jones”. Her Grandchildren will remember her through the fond memories of picking raspberries in her garden, or feeding the fish in her backyard pond, and always getting some sweet treats from the kitchen. She always had a wonderful garden stemming with beautiful flowers, which she loved to work in, you would often see her out front tending to her flowers with a beautiful sun hat. Edna was a hard worker, who worked as the boot and clothing manager at North 40 Outfitters for 19 years until her battle with Lymphoma forced her to retire. She was an honest worker, who always had a job whether it be staying home with her Grandchildren when they were little, to fitting entire rodeo teams with boots and spurs. She always went above and beyond to help others, whether it be at home, at her church, or in her workplace. If you needed help, Edna was always the first one to offer her hand and heart. There is no doubt in her families’ mind that Edna was welcomed into Heaven and the arms of Jesus, for throughout her life she lived as honestly and loving as she was able too while serving her church and loving her family. She is no longer in pain but will be enjoying watching her family continue to grow and love, from heaven above, with an ever abundant garden and warm sun shining all around. “I am with you wherever you go” Joshua 1:9 Services are scheduled or Saturday, September 14th with the viewing held from 2 to 3 at Kayser’s Chapel 831 S Pioneer Way, Moses Lake, WA with services at 3:30 at First Baptist Church of Moses Lake 724 4th Avenue, Moses Lake, WA

Edna Irene Jones (Smith) went to heaven&#8217;s gate on September 7, 2019 in Puyallup, Washington. She fought a hard and brave battle with lymphoma. Her one true love, Frankie was holding her hand as she was welcomed by Jesus. She is preceded... View Obituary & Service Information

The family of Edna Irene Jones created this Life Tributes page to make it easy to share your memories.