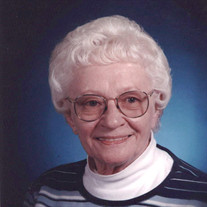 Dorothy Agusta Sinclair, God’s servant, went home to be with the Lord on Sunday, January 29th, 2017. Dorothy was born in Lewiston, Idaho on January 20, 1932 to Gustav Adolph Rudolph and Martha Ida Otillia Kruger. She was the youngest of three daughters. Dorothy grew up on the family farm in Cameron, Idaho. She graduated and went on to college in Lewiston, Idaho where she met Kenneth Gene Sinclair. Dorothy and Kenny were married December 27, 1951. Kenny died at an early age leaving Dorothy a widow with four young children to raise. Dorothy returned to Lewiston to be near family and worked at Potlatch Corporation as an accountant. Dorothy was very involved in the lives of her children and her church. She returned to Moses Lake once her children were grown and married. While in Moses Lake, Dorothy was very involved in Immanuel Lutheran Church. Dorothy served as a Sunday school teacher, a council member for many years and her true love, as an aide to the preschool. She touched the lives of many children, who eventually returned to visit Dorothy after high school graduation. Dorothy had the heart of a true servant, caring for her neighbors in their advanced years. In her spare time, Dorothy loved playing cards, making quilts, and spending time with her grandchildren and great-grandchildren. She is preceded in death by her husband, Kenneth, mother and father, Martha and Gus, her sister, Elsie Freeman and brother-in-law, John Blankenship. She is survived by her daughter, Teri Oliver (Dave), Moses Lake, daughter, Wendy Gies (Dale), Moses Lake, son, Kenneth (Skip) Sinclair, Moses Lake, and daughter, Marta Simianer (Todd), Missoula, MT, sister, Rosalie Blankenship, Lewiston, and brother-in-law, Ted Freeman, Lewiston, Idaho, 10 grandchildren, 22 great-grandchildren, numerous nieces and nephews. The family would like to thank Dr. Warner and Mary Ann of Assured Hospice for taking special care of our mom. Dorothy was baptized at an early age into the Lutheran Church. She was a firm believer in Jesus Christ throughout her life. She is now resting in the arms of Jesus in the presence of God. Services will be held on Saturday, March 11, 2017 at 1:00 at Immanuel Lutheran Church, 1020 South A. Street, Moses Lake. Please share a memory or leave a note for the family at www.kayserschapel.com Arrangements are in care of Kayser's Chapel & Crematory.

Dorothy Agusta Sinclair, God&#8217;s servant, went home to be with the Lord on Sunday, January 29th, 2017. Dorothy was born in Lewiston, Idaho on January 20, 1932 to Gustav Adolph Rudolph and Martha Ida Otillia Kruger. She was the youngest of... View Obituary & Service Information

The family of Dorothy A. Sinclair created this Life Tributes page to make it easy to share your memories.

Dorothy Agusta Sinclair, God’s servant, went home to be with...