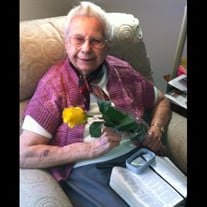 Dorothy Fern Naber, 92, a resident of Moses Lake since 1977, passed away Monday, June 12, 2017 at Columbia Crest Care Center. She had been living at Brookdale, formerly known as Hearthstone for the past 3 1/2 years. Funeral services will be held at 2 p.m., Thursday, June 22, 2017 at Kayser's Chapel. Interment will be in Pioneer Memorial Gardens. Dorothy was born on November 18, 1924 in Kamrar, Iowa to Ben and Bertha (Cordes) Heyer. The family moved to Grove City, Minnesota in 1935. Paul Naber met and married Dorothy on June 1, 1951. They enjoyed farming together until Paul's passing in January of 2002. Paul and Dorothy lived various places that included Minnesota, Colorado and Washington. Dorothy said she always enjoyed moving, living the longest in Moses Lake, considering this to be home. Dorothy worked at Sears in Minneapolis, Minnesota, but loved being a homemaker and Paul's helper. In May of 1937, Dorothy made a lifelong commitment to serve God and kept true until she left us. Paul and Dorothy had no children, but dearly loved their families. Dorothy kept in touch with siblings, nieces and nephews on both sides of their families until her last days of her life. She was known as the "party planner", never wanting to miss any reason to get her friends together to celebrate a birthday, anniversary or any reason she could invent. We will all miss her care toward us. She was delighted for a few years to be able to offer their shop to use for Gospel Meeting Services and occasional potlucks. Dorothy is survived by her sister, Phyllis and Floyd Krueth of Arden Hills, Minnesota; three sisters-in-law, Ruby Naber of Willmar, Minnesota, Eva Heyer of Chaska, Minnesota and Samuela Heyer of Willmar, Minnesota and many nieces and nephews. She was preceded in death by her husband, Paul, parents, Ben and Bertha Heyer, brothers, Lawrence and Vernon and sister, Karen.

Dorothy Fern Naber, 92, a resident of Moses Lake since 1977, passed away Monday, June 12, 2017 at Columbia Crest Care Center. She had been living at Brookdale, formerly known as Hearthstone for the past 3 1/2 years. Funeral services will be... View Obituary & Service Information

The family of Dorothy Naber created this Life Tributes page to make it easy to share your memories.