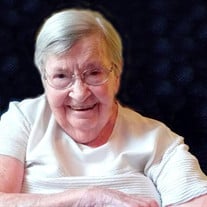 Dorothy Ann Dano, 98, a resident of Moses Lake passed away on Thursday, December 21, 2017 at Faith-Larkin Home Care. Born on August 6, 1919, in Nez Perce Idaho, she was the youngest of 6 children of Mary and Louis Koenigs. She had great longevity in her family: her brother Al lived to be 100 and her sister Kay Pettigrew, currently living in Seattle, is 99. Dorothy married Harrison King Dano on March 28, 1942, in Seattle. Two days later Harry joined the Navy in the aftermath of the attack on Pearl Harbor. Dorothy lived in Spokane with her parents during the war years, working as a comptometer operator for Standard Oil and Great Northern Railroad. After the war, Dorothy and Harry moved to Ellensburg, where Harry began his law practice. They lived there for over 30 years, raising their four children. In 1977, Dorothy and Harry moved to Moses Lake where Harry set up another law practice. Dorothy loved gardening and enjoyed the warmer, sunnier climate of Grant County. She maintained a large vegetable patch and also raised grapes and raspberries. An excellent bridge player, she was always a talented athlete, and an avid golfer and bowler well into her 80’s. Watching sports on TV was a great joy to her. She loved Gonzaga basketball, WSU football, the Seahawks and the Mariners. The sports page was her favorite section in the newspaper. The anchor in Dorothy’s life was her Catholic faith. She attended daily Mass until she was no longer able. She prayed the rosary and the chaplet of Divine Mercy daily, along with a litany of prayers for all her relatives and loved ones. She was a prayer giant; we told her that she lived so long because her role was to pray all her family into Heaven. Dorothy is survived by her four children, Brian (Cynthia) of Soap Lake;, Meredith Olson (Jim) of College Station, Texas; Keith (Renie) of Hoquiam; and Garth of Moses Lake. She has 14 grandchildren and 25 great grandchildren. Dorothy was preceded in death by her husband, Harry (2002), and two grandsons, Jarrod Dano (1984), and Garrett Dano (2017). We wish to thank Amanda Valencia of the Faith-Larkin Home, and all the staff, Lilya, Aida, Reyna, Alona, Daniel, and her special friend Vivian Montoya, for their constant love of and care for Dorothy during her final years. Holy Rosary will be prayed at 4:30 p.m., Thursday, December 28, 2017 at Kayser's Chapel. Mass of Christian Burial will be held at 11 .m., Friday, December 29th at St. Rose of Lima Catholic Church in Ephrata followed by burial in the Ephrata Cemetery. Please sign the online guestbook or leave a note for the family at www.kayserschapel.com Arrangements are in care of Kayser's Chapel & Crematory.

Dorothy Ann Dano, 98, a resident of Moses Lake passed away on Thursday, December 21, 2017 at Faith-Larkin Home Care. Born on August 6, 1919, in Nez Perce Idaho, she was the youngest of 6 children of Mary and Louis Koenigs. She had great longevity... View Obituary & Service Information

The family of Dorothy Ann Dano created this Life Tributes page to make it easy to share your memories.

Dorothy Ann Dano, 98, a resident of Moses Lake passed away on...