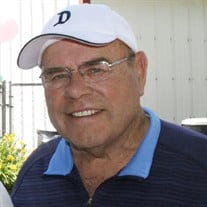 Donald “Steve” Hill, 73, died October 7, 2018. Donald “Steve” Hill of Moses Lake, was welcomed into heaven October 7th, 2018. Steve was born November 20th, 1944 in Bonners Ferry, Idaho. He was the son of the late Winona and Don Hill. Steve joined Hagadone Directories on January 1st, 2001. He retired after exactly 13 years with HDI in 2013. Prior to his time with Hagadone Directories, Steve was the publisher at the Columbia Basin Herald, which is also a Hagadone owned company. Steve worked for the Hagadone Corporation for over 30 years. Steve was a family man. He loved get togethers and barbecues. Every holiday was a cause for celebration, painting eggs, carving pumpkins, Christmas lights, May Day flowers, always with a crowd of grandchildren running around. Steve loved to sing and play the guitar, especially the “oldies”. Steve took great pride in his flowers and plants and could often be seen with his wife Sandy on the patio playing Yahtzee surrounded by Roses, Pansies, Daffodils and Sunflowers. Steve was a loving father, who took great pride in his children and grandchildren. “Coffee Wednesdays” were also special to Steve, a time to laugh and visit with his life-long friends. On weekends, you would find him rooting for the Cougs on Saturday and the Seahawks on Sunday. He was an avid hunter and looked forward every year to a sagebrush hunt, not missing an opening day since 1973. He also enjoyed feeding “his” birds and squirrels building elaborate houses and fancy feeding stations. Steve Hill was a kind and gentle man of purpose that will be missed by all who knew him. Steve is survived by his loving wife Sandy of 44 years, daughter, Michelle and husband Matt Krogh of Moses Lake, son Michael and wife Julie of Surprise, AZ, and son Richard of Montana, and a very dear brother-in-law Stephen Wahl. His grandchildren include Collin and Madison Krogh, Brandon, Jordan, Tyler and Kim Laufer, Saydee and Sandra and two great grandchildren, McKenzie and Madison Laufer. Services will be held Friday, October 12, 11:00 at the Moses Lake Alliance Church 1100 N. Grape Drive in Moses Lake.

The family of Donald "Steve" Hill created this Life Tributes page to make it easy to share your memories.