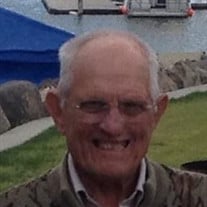 Donald William Fowler, 82, of Lind, Washington, succumbed to cancer at Samaritan Hospital in Moses Lake, Washington on November 21, 2019. Donald was the oldest of 6 children, he is survived by his wife Susan of 14 years, son Donald W Fowler Jr (Cora), daughter Tracy L Mark (Leroy), son Mark A Fowler (Indira), son Clay W Fowler (Kelly), brother Curtis H Fowler II (Lynette), sisters Joan Balusik (Derv), Ione Whipple (Harry), aunt Sharon L Adams, uncle Clarence Kemmer Jr, and many loving grandchildren, great-grandchildren, great-great-grandchildren, nieces, nephews, and extended family. Donald was a loving father, husband, grandfather, and friend to many. Donald was preceded in death by his wife Deanna J Palmer, sister Alice, sister Elaine, and parents Velva M Kemmer and Harold E Rose. Donald was a devout Christian and enjoyed fellowship a great deal. He loved to share the gospel with whoever would listen, he considered himself a student of the Lords teachings. His Christian family at Bethany Baptist Church was something he placed great value on. Donald, was a 22 year Navy veteran, retiring in 1975 from NAS Whidbey. He started his career on an R6 (C-118) Squadron flying countless servicemen home to their final resting place. He transferred to sub-chasers a few years later and flew with the VP-19 squadron (P2V Neptune) out of Kodiak, AK. In 1966 Donald transferred to VP-46, a squadron flying P-3 Orion’s. 1966 and 1967 found him stationed in Utapao Thailand, this crew was no stranger to the Golf of Tonka. He finished his navel career as an electronics instructor stationed at NAS Whidbey Island. Donald loved hunting elk, and game birds, the last 10 years he took up rock hounding and really enjoyed sharing that hobby with his loving wife Susan. He was a competitive shooter and enjoyed participating in F-class matches in Washington, Idaho, Wyoming, and Colorado. Donald enjoyed raising horses, mules, and burros, and was an avid rider, this was something he and his wife Susan thoroughly enjoyed. Once retired from the Navy, Donald attended Oklahoma Farrier’s College in Sperry, OK. Working as a farrier provided a modest living while allowing him to spend time with horses and like-minded people, something he valued greatly. Later he became an electrician and instrumentation technician working in many mines and the oilfield. He later opened and operated an electrical business until his retirement a few years ago. A celebration of life service will be held at Bethany Baptist Church, in Connell, WA on Saturday November 23, 2019 at 11:00. Fellowship and a meal will be provided following the services.

Donald William Fowler, 82, of Lind, Washington, succumbed to cancer at Samaritan Hospital in Moses Lake, Washington on November 21, 2019. Donald was the oldest of 6 children, he is survived by his wife Susan of 14 years, son Donald W Fowler... View Obituary & Service Information

The family of Donald William Fowler Sr. created this Life Tributes page to make it easy to share your memories.