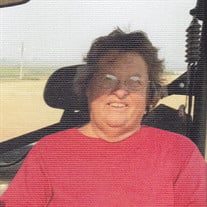 Dixie Ettles was born on October 31, 1954 to parents Lee and Darlene Ettles. She was followed by twin brothers Ron and Rob Ettles, April 9, 1961. These three children would learn to work hard as was required of children helping their parents forge a life for their families in the early days of the Columbia Basin. Hardships were overcome, and the efforts became a valuable piece of the puzzle that is still forming the Royal Slope farming community. Dixie worked many jobs during her life. Dixie helped her parents take supplies to sheep herders, and she was a babysitter for Frank and Chris Mianecki. She would later work for Far West Foods, Royal Flying Service, Sunfresh, Janett Farms, clean houses with long time friend Patty Shear, irrigate for Baird Farms, work in numerous ways for Mike Brown, then ended up back helping brothers on Twin Acres Farms. During her years of hard work, Dixie would give birth to a son, Jared Ettles, on March 11, 1983. In the years to follow she continued her strong work ethic while making time to ensure her son succeeded in his education. Dixie lost her mother Darlene in June 2006 and her father Lee in April 2008. March 20, 2010 Dixie gained a daughter when Joyce Ray married Jared. Joy and Dixie shared much fun and laughter in the years to come. In 2019 Dixie discovered she had a half brother John Woods thanks to a DNA test. Dixie has now passed on to a better place leaving her wisdom, love and fond memories with all who have known her. She has always spoken her mind, helped brighten our days, and will never be forgotten. Her quick humor and willingness to say what needed to be said will stay with all who have known her. We love you Mother, Sister, Daughter, Niece and friend. This isn’t goodbye, just see you later, as Bonnie would say.

Dixie Ettles was born on October 31, 1954 to parents Lee and Darlene Ettles. She was followed by twin brothers Ron and Rob Ettles, April 9, 1961. These three children would learn to work hard as was required of children helping their parents... View Obituary & Service Information

The family of Dixie Lee Ettles created this Life Tributes page to make it easy to share your memories.