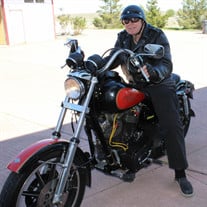 Dennis Michael Kauffman, “Mike,” age 68, went to be with the Lord on Tuesday, January 21, 2020 in Moses Lake, Washington. Mike was born in March of 1951 in Bloomsburg, Pennsylvania. Mike graduated from Shadle Park High School in Spokane, WA in 1969. Mike served our country in the Air Force as an aircraft mechanic during the Vietnam War and continued this career after his departure from the military where he worked for Lockheed Martin in Saudia Arabia. It was there, where he met the love of his life, Gemma. The two married in December 1981 in the Philippines. After marriage, they finished their work contracts in Saudia Arabia before moving to the Philippines. In December 1984, Mike and Gemma welcomed their first daughter, Sharlene. Shortly after Sharlene was born, the family relocated to California and eventually to Moses Lake as Mike felt it would be a great place to raise the family. In April 1989, Mike and Gemma welcomed their second daughter, Rowena. Mike taught his girls his favorite hobbies which soon became their favorites, too. These hobbies included hunting, fishing, target shooting, riding motorcycles, autocross racing, and spending time with his family. Mike was a longtime resident of Moses Lake, Washington. Mike and Gemma spent most of their time with their family, especially after retirement. Mike was always smiling and enjoying life. Mike had a great sense of humor and was always cracking jokes. He was the best husband, father, and grandpa. Mike is survived by his wife, Gemma Kauffman, his daughters Sharlene Hopkins (Aaron Hopkins) and Rowena Peters (Derek Peters), his father Harry Kauffman, his sister, Mollie Lucas (Mark Lucas), his brother Patrick Kauffman, and grandchildren (Barrett and Grady). He is preceded in death by his mother, Laura.

Dennis Michael Kauffman, &#8220;Mike,&#8221; age 68, went to be with the Lord on Tuesday, January 21, 2020 in Moses Lake, Washington. Mike was born in March of 1951 in Bloomsburg, Pennsylvania. Mike graduated from Shadle Park High School in... View Obituary & Service Information

The family of Dennis Michael Kauffman created this Life Tributes page to make it easy to share your memories.