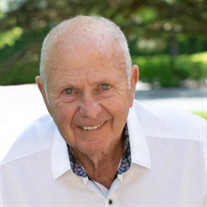 Dennis Aloys Ahmann, God’s humble servant and loving husband to Kathy, died peacefully on June 9, 2020 surrounded by family. He was born on June 21,1936 in Minot, North Dakota to Leo and Harriet Ahmann as 1 of 14 siblings. Dennis graduated from Enumclaw High School in 1954. Dennis in his youth took pride in 4-H showmanship, senior high school basketball and track. Dennis served in the Army until 1961. Dennis married Kathryn O’Connell on April 16, 1966. Together created a lifetime of love, faith and raising their eight children instilling in them strong work ethics and values. Many memories were made, and life lessons learned on the farm, including trust in the Lord, be a person of your word, and strength in working together. Always a farmer, he initially dairy farmed with his father in Enumclaw. He then partnered with his brother on a dairy in Issaquah WA. In 1970, Dennis and Kathy moved to Moses Lake where they purchased the family farm and transitioned to crop farming and raising Holstein heifers. He loved a newly plowed field in the spring and a harvested field in the fall. He worked tirelessly and did his part to improve the land. So, in 1976 Dennis received one of his proudest honors, Farmer of the Year. He retired from farming at age 70, but never lost interest in cultivating the ground of an abundant garden which he shared his bounty with anyone that stopped by. Dennis is most remembered by his kind, and humble nature. He was extremely generous and was always willing to help his family and friends. Dennis and Kathy hosted many youth in their home including nephews, foster care and international exchange students. He also spent many hours supporting and watching his children and grandchildren play sports and engage in their extracurricular activities. He marveled at the opportunity to be a basketball coach for his two youngest sons. Dennis was devoted to his faith and attended daily mass for many years. He was a member of Our Lady of Fatima Catholic Church Friends of Fatima stewardship and Knights of Columbus in which he served as chairman of the Annual Golf Tournament Fundraiser to benefit Pro-Life. . Dennis began to struggle with the effects of Parkinsen’s Dementia. Kathy prepared a home in town near their children so he could remain by her side through the many challenges, to the end. He was preceded in death by his parents and young sister, Kathryn; sisters Leona, Anne and Rosemary; brothers Cornelius, Joe and Jerry. Dennis is survived by his wife Kathy, and their eight children: Shane (Brenda) Ahmann, Margaret (Richard) Rodriguez, Julie (Ron) Perry, Monica (Toby) Snider, Shannon (Ray) Towry, Hollie (Mark) DuVall, Andrew (Ashley) Ahmann, and Matthew (Hannah) Ahmann, twenty-nine grandchildren and two great-grandchildren. Dennis is survived by one brother Mike Ahmann, three sisters, Irene Moyer Maryellen Morneau, Angie Mills and Cheri Patrick and many nieces and nephews. His family continues to grow in numbers welcoming new members through marriages and births. We commit to continue the legacy of loving God, each other, and staying connected. The celebration of Dennis's life will take place at Our Lady of Fatima Catholic Church on Tuesday, June 16. Rosary will be at 9:30 a.m. followed by mass at 10:00 a.m.. Due to Covid-19 restrictions please contact Our Lady of Fatima Catholic Church if you would like to attend. Seating will be in the main church and gathering area. If you feel you are unable to attend due to Covid 19 restrictions the celebration will be livestreamed. Please refer to Kayser's Chapel website and Matt Ahmann’s Facebook for more information. Family and friends are invited to honor and celebrate his life immediately following the service. In honor of Dennis’s memory, please send a plant or flower that can be replanted in his memory.

The family of Dennis Aloys Ahmann created this Life Tributes page to make it easy to share your memories.