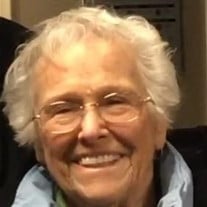 Deloris Fay Brown, February 27, 1932 – February 27, 2022 Deloris Fay Brown was 90 years old when she left this earth, in the loving arms of her heavenly Father, on February 27, 2022, at Samaritan Hospital in Moses Lake, Washington. Fay was born on February 27, 1932, in White Lake, Wisconsin, the only child of Glen and Wilma (Allen) Roe. She met her husband to be, Ronald Brown in High School and they married in Tacoma, Washington on March 7, 1951. Fay lived in various places while Ron served in the Army before making their home in Moses Lake, Washington in 1961. Together they have 4 children: daughters, Sharyn (Ben) Kaufman, Lenore (James) Colee, LaVonne (Steve) Jones all of Moses Lake, Washington and son, Steven (Kathy) Brown of Apache Junction, Arizona. Fay was a loving grandmother to 9 grandchildren and 9 great grandchildren. Fay enjoyed raising her family and working as a Telephone Operator in Ephrata, Washington for several years and later became an Engineer Secretary for Quest and Pacific Northwest Bell for over 20 years until she retired. She loved to travel and after retiring she would take several trips overseas and in the United States. Fay and Ron enjoyed traveling in their motorhome, fishing, and camping with their family. As an avid sports fan, you could often find her watching a game and enjoying dinner with her loving companion Russell Solberg. Fay will be remembered for her kind spirit and generosity towards others, her faith and love for God, and as a prayer warrior for her family and friends. Her faith helped her endure the hardships she faced and became a mentor to her family and friends. She was a member of North Shore Church in Moses Lake and wished to sing in God’s choir. Graveside services will be held at Guarding Angels Cemetery, 2595 Rd. L NE., in Moses Lake, Washington, on April 2, 2022, at 2:00 p.m. Donations can be made in her name to the following: Shriners in Spokane, Washington, Grant County Humane Society, and the Salvation Army.

The family of Delores Fay Brown created this Life Tributes page to make it easy to share your memories.