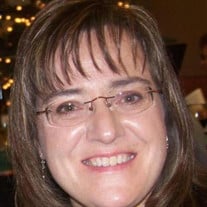 Deborah Jeanne Hassan 53, was born December 9, 1967 in Rice Lake, Wisconsin to Sam & Mary Librande. She passed away, surrounded by her family on November 16, 2021, after a courageous 3.5-year battle with pancreatic cancer. Debbie moved with her family to Coeur d’ Alene, Idaho in 1976. Debbie participated in many school activities including sports & band. She was a stellar student with an incredible thirst for knowledge. It was in high school that those around her began to notice what a rare and treasured talent she would become. Debbie graduated from Coeur d’ Alene High School in 1986. Debbie subsequently enrolled in the accounting and business program at North Idaho College. She graduated with highest honors in 1989, while simultaneously working multiple jobs to support herself. It was after this time she met her future husband Jim Hassan, and relocated to Moses Lake. They were married on May 28, 1993. Debbie utilized her training by working in the accounting and private business fields. She was an accounting manager at Able Building Supply for many years. She moved on and joined the Jones Group of Companies in 2004. She started as a member of their accounting staff, and advanced to controller until 2021 when she was selected as the Chief Financial Officer. Debbie’s skill set was a marvel, words do not accurately convey her capabilities. It has been an overwhelming and emotional loss for the Jones Group. She was truly gifted and giving of herself like none other most have known. Debbie loved her family and friends. She thoroughly enjoyed baking, reading, crocheting, fishing, music, cross word puzzles, and traveling. Debbie was an avid sports fan. Running Bloomsday was always a cherished event. She also was most supportive of her children’s sporting events. Whether it was Joe’s football or Jenny’s soccer games, she was there. Debbie loved the Detroit Red Wings, Seattle Mariners, Seattle Seahawks, and Gonzaga Basketball. She was very excited about the new Seattle Kraken hockey franchise. To know Debbie was to love her. She touched so many lives with her generous spirit and unquenchable zest for life. She made so many friends both personally and professionally during her time with us. She is survived by her husband Jim, children Jenny (Charlie), and Joey plus numerous brothers, sisters and in-laws. Debbie conducted battle with illness, with strength, determination and utmost dignity. She was a fighter, warrior, and champion of the highest order. She is an inspiration to all. Debbie’s passing has deeply impacted so many and she will be so greatly missed. Family and friends are encouraged to attend Debbie’s Celebration of Life on January 15, 2022 at 2:00pm at the Quincy Public Market (1004 F St SW, Quincy, WA 98848). In lieu of flowers the family requests that donations be made to the Columbia Basin Cancer Foundation.

Deborah Jeanne Hassan 53, was born December 9, 1967 in Rice Lake, Wisconsin to Sam & Mary Librande. She passed away, surrounded by her family on November 16, 2021, after a courageous 3.5-year battle with pancreatic cancer. Debbie moved with... View Obituary & Service Information

The family of Deborah Jeanne Hassan created this Life Tributes page to make it easy to share your memories.