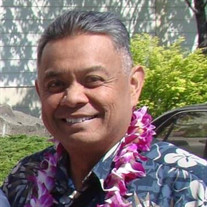 Davie Dominic Alporque January 5, 1951 – January 5, 2021 It’s not easy to say in a few words about someone who put others first, and made lasting impressions. Davie was born in Aiea, Hawaii to Rudy and Dede Alporque, the oldest of four children. They later moved to Ewa Beach and he graduated from James Campbell HS in 1969. He started a tradition as the first guy on the pep squad. He was athletic, and led various school events. One summer he worked as a student in engineering at the Naval Station. An avid surfer, tennis player, sprinter, bowler, and he also practiced martial arts. He told stories of feeding fighting roosters, and fishing in the bay with his dad. Upon graduation he requested a brochure from Big Bend Community College (graduated 1972). When he arrived in Moses Lake he was shocked to see the desert, wondering if he made a mistake. He was involved in sports, a cheerleader, and enjoyed a tennis match with Arthur Ashe. Within a few months of moving to Moses Lake, he met Cindy, and they married in 1973. He worked part time at Lake Bowl while going to school. He taught tennis for ML Parks and Recreation, pitched softball, and later competed in the Spring Festival Bed Races and Paddlers Classic. His first full-time job was custodian for the ML School District. Shortly thereafter Davie started work at the Irrigation District where he met Bob and Tom whose families became lifelong friends. Due to his mechanical abilities, he worked in the maintenance shop where he welded, fabricated, and later operated heavy equipment. His heavy equipment experience led him to excavate and install his swimming pool, and he volunteered for the ‘90 marathon excavating of the ML Sports Complex. In 1985, Davie started working for GC PUD, first in the warehouse, and then in engineering. Part of his duties included operating the shore patrol boat along the Columbia River, which he really enjoyed. Least favorite was fighting spiders all the way to the depths of the dam to take readings. Davie and Cindy graduated together from Eastern Washington University in 1992 (attended by daughters Tiana and Amy and sitter, Marta). Davie was a natural when he picked up golf, and enjoyed playing individually and team events. He and his friend, Jeff, decided that the Soap Lake Great Canoe Race was just the challenge they needed. They trained extensively for the paddling, portages, and avoiding rattlesnakes. Davie competed three years in the race with various participants, including Lynn who worked with Cindy. Cindy’s dad gave Davie his shotgun when he first showed interest in hunting pheasants and ducks. He really enjoyed hunting, and even did some ice fishing. Davie continued his passion for coaching his daughters and their teams. He coached basketball, and track and field, for ML Christian Academy and Ephrata High School. He became USATF certified and started a local USATF team where athletes could gain competing opportunities. He also participated in the USATF Master’s competitions for throwing and sprints. Davie privately trained athletes who were later offered scholarships. Due to multiple health issues, Davie retired from GC PUD in 2014, and passed away from Coronavirus in the Wenatchee Hospital. The family is thankful to have a small service at his hospital bedside the night he passed, on his 70th birthday, and appreciate his care from the medical professionals from the Hospital, Confluence Health, Providence, and ML Dialysis Center. Both sisters took steps to donate a kidney for transplant, but his health never allowed it. He appreciated their willingness to give selflessly. Davie had a tremendous love for his family, friends, and church where he served as elder and had the privilege of Bible study in his home. Davie encouraged Cindy to have people over, and wanted everyone to have a good time. He loved having the ministers stay and was always thankful for their visits. He treasured rocking Kai and Kona to sleep while singing “Tell Me the Story of Jesus.” Cindy’s mom thought Davie could do no wrong, and travelled with the family to Hawaii, Taiwan, Japan, UK, and Europe. He told Tiana to be sure and call her auntie Linda because he knew it was important to keep in touch. He loved talking with family in Hawaii, and visited annually. Davie has been described as a true gentleman, kind, giving, sharing, faithful, a good man with a big heart, thoughtful, positive, and content. Best of all, they say he is released from this earth’s body, and is “home now.” Davie was preceded in death by father Rudy, and his brother Donnie. Surviving family includes wife, Cindy, daughters Tiana Los (Robert), Amy Thompson (Brendan), grandchildren Kaikane and Kekona Thompson, mother Dede, sisters Dani McCarthy (Stephen), Dina Turban (Joseph), nieces and nephews Taylor (Scott), Brian, Erin, Jason, and many extended family. See Chapel of Memories’ website for pictures of family, friends, sports, and work that will continue to be posted. A memorial service is planned for the summer so Hawaii family, who welcomed Cindy’s family as their own, can attend. A memorial service will be held July 17th at the Ephrata High School Track and Football Field. There will be a lunch following at the Recreational Center and inurnment at the Guardian Angels Cemetery at 3 PM.

Davie Dominic Alporque January 5, 1951 &#8211; January 5, 2021 It&#8217;s not easy to say in a few words about someone who put others first, and made lasting impressions. Davie was born in Aiea, Hawaii to Rudy and Dede Alporque, the oldest of... View Obituary & Service Information

The family of Davie Dominic Alporque created this Life Tributes page to make it easy to share your memories.