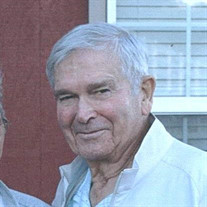 David A. Vining, age 85, died peacefully Tuesday, August 15, 2017 at Central Washington Hospital in Wenatchee, Washington, with long-time partner Phyllis Sievert by his side. David had bravely fought multiple health issues for the past several months...and now he is at peace with his Lord. David was born in Etna Green, Indiana to Clyde and Evelyn Vining, the 2nd oldest of 3 children, including his sister Clara and brother, Craig. David had an interesting employment history. While in the Army, he did surveying and construction work on the DEW Line in Alaska; surveyor for the City of Seattle; inspector on the construction of PUD dams on the Columbia River, ranging from Boundary Dam in the north to Priest Rapids in the south; Washugal fish hatchery; managing construction of Crescent Bar Park for the Port of Quincy; then managing the park itself, after the construction, for 4 years; then to the Port of Seattle as an inspector on the construction of the Parking Garage at Sea-Tac Airport, staying on at the Port until his retirement in December 1990 as Assistant Superintendant of Maintenance for the waterfront. He had 3 sons by his first marriage; David, Jr., Murray and Brian. He loved and was very proud of all of his family. When he was able, his past-time pleasure was to tinker in the shop. He modified several utility trailers, and worked on any other project that required "building something." David and Phyllis had many wonderful years together. They would go golfing, snow-mobiling, fishing, deer hunting, pheasant hunting with their dogs, traveling in their motor home, and he would play cards at any opportunity. For ten years, they were "snow birds" in Arizona and California, staying mostly at NAS El Centro, California, the winter training grounds for the Blue Angels. They each have personalized plaques from the Blue Angels. They loved and enjoyed their Brittany Spaniel dogs and recently acquired a Papillon dog. David was a loving, caring and generous man, a wonderful partner, always willing to do things together, especially spontaneously. He will be missed greatly. While he always believed in God, David became a Christian about 8 years ago and he lived his faith. He was a member of Immanuel Lutheran Church in Moses Lake, Columbia Basin Elk Lodge #1930, the American Legion and Sandy Sams Camping Club. He was preceded in death by his father and mother, Clyde and Evelyn Vining; brother, Craig Vining; first wife, Beverly; and second wife, Betty. He is survived by his partner and companion of 27 years, Phyllis Sievert; sons, David Jr. (wife Patty) of Kirkland, WA, Murray (wife Marlene) of Puyallup, WA, Brian (wife Terri) of Buckley, WA; sister, Clara Page, Moses Lake; nephew, Mike Alwine (wife Lynn) Moses Lake; 6 grandchildren and 10 great-grandchildren. Memorials to Serve Moses Lake, PO Box 548, Moses Lake, WA 98837 Memorial Services will be held at 2 p.m., Saturday, August 26, 2017 at Immanuel Lutheran Church, 1020 S. A Street. Online guestbook at www.kayserschapel.com

The family of David A. Vining created this Life Tributes page to make it easy to share your memories.