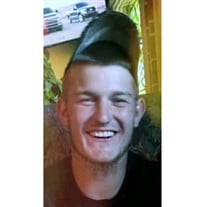 David Johnny Moeller, age 26, passed away Wednesday, July 25th, 2018. He was born to Colleen Hecker and Bo Moeller on July 7th, 1992 in Othello, WA and was the youngest of three children. David graduated from Moses Lake High School in 2011 and worked for Hampton Construction for the past seven years, where his reputation for being a hard worker was well known and talked about in the construction industry. David enjoyed spending his time outside at the sand dunes and mud flats. He was always down for a good time and lived by the minute. His hunger for life was only matched by his hunger for food. Any food, with is birthday bottle of Tapitio from his Ma by his side. David had an infectious smile with a personality that would fill a room. He was a loyal son, brother and friend who was all in, all the time. David never did anything out of spite and had a soft, kind heart. He cared more about others than himself. Our Davey is survived by his mom, dad, step-father Eric, his #1 ride ‘n die brother Allen (Tammi), his sister Shatame, his nieces Haley, Cadence, MacKenzie, Izzy and Piper and nephew Liam who all lovingly referred to him as just “Uncle”, his grandma Patricia McDaniel and grandpa Don Beard, seven Aunts and Uncles and many, many cousins who will all miss the baby of the family. He was preceded in death by his grandpa John. Gone too soon but never forgotten. Tear up the skies Grendal. Public Viewing will be held at Kayser’s Chapel (831 S Pioneer Way, Moses Lake) on Tuesday, July 31st from 2-4pm. Memorial service will be held at Zamora Park (410 N Clover, Moses Lake) on Saturday, August 4th at 9am. In lieu of flowers, donations can be sent to Desert Racing 4x4 at 4325 Star Drive, Moses Lake, WA 98837

David Johnny Moeller, age 26, passed away Wednesday, July 25th, 2018. He was born to Colleen Hecker and Bo Moeller on July 7th, 1992 in Othello, WA and was the youngest of three children. David graduated from Moses Lake High School in 2011... View Obituary & Service Information

The family of David J Moeller created this Life Tributes page to make it easy to share your memories.