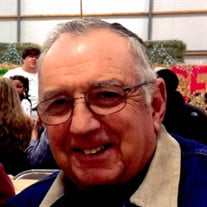 On Sunday, May 3, 2020 David Lee Miller, a loving husband, father and grandfather passed away at the age of 73. Dave, as he was better known, was born on November 1, 1946 in Yakima, WA to Ralph and Ivy (House) Miller. He attended school in Yakima thru the 6th Grade then completed school in Royal City. His Freshman, Sophomore and Junior years were in Othello, as Royal City did not have a High School. He then returned to Royal for his Senior year. Dave graduated in the first class out of Royal High School in 1965. The class consisted of 14 boys and 7 girls. Ralph, Ivy, older brother Willis and Dave broke units out of sagebrush in 1958 and began raising alfalfa and row crops in the newly established Columbia Basin. To help sell the hay, Dave started trucking in 1963. He continued delivering alfalfa, orchardgrass, timothy and straw until December 2019. His goal was to truck for 60 years. On January 25, 1969 David married Ethel Wallace of Quincy, WA. They welcomed their first son Davey on January 1, 1971 and second son Daniel on November 24, 1973. Dave had a true love for delivering hay to customers all over Washington. Most of his customers he considered family and they considered him the same. He loved sharing the bounty of the Columbia Basin with his customers. It wasn’t uncommon for him to take pounds of potatoes, onions, peaches, apples, asparagus or melons to his ever expanding family. His family included dairyman, employees at feed stores, horse stable owners and equipment salesman. Everyone whom knew Dave was always thankful for his produce deliveries. When in season, Dave would pick up strawberries, raspberries and blueberries to share with friends and family. He was affectionately given the nickname “BERRY FAIRY” by a longtime family friend. Dave had an infectious laugh and friendly demeanor that he could strike up a conversation with anyone and by the time they parted ways a friendship was formed. He loved collecting antique farm machinery, traveling with Ethel or his four grandchildren. Dave was preceded in death by his father, Ralph, mother Ivy, brother Willis and daughter in law Michelle. He is survived by his wife, Ethel, sons Davey (Melanie) and Dan, and four grandchildren, Rylie, Lizzi, Ty and Colin. A Celebration of Life will be held in the fall.

On Sunday, May 3, 2020 David Lee Miller, a loving husband, father and grandfather passed away at the age of 73. Dave, as he was better known, was born on November 1, 1946 in Yakima, WA to Ralph and Ivy (House) Miller. He attended school in... View Obituary & Service Information

The family of David Lee Miller created this Life Tributes page to make it easy to share your memories.