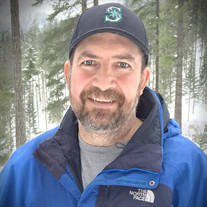 David W. Hoing, 44, passed away in Seattle on July 15, 2017. Funeral services will be held at 10 a.m., Saturday, July 22, 2017 at the Intermediate Auditorium - Royal City School. Graveside services will follow at Royal Memorial Gardens. Following the graveside, a reception will be held at the Intermediate School Cafeteria. Please sign the online guestbook or leave a note for the family at www.kayserschapel.com Arrangements are in care of Kayser's Chapel & Crematory. He was born on November 29, 1972; his parents are Jerry and Betty Hoing. David lived his childhood in Royal City and graduated with honors from the Royal School system. He then attended and graduated from Gonzaga University with a degree in mechanical engineering. His first and continuous job was with an automation tech company in Wichita, Kansas, where he had moved to court Amy Miller who was there in medical residency. After their marriage in 1998, they continued to work in Kansas for nine years, during which time their twins, Gabe and Will, were born on May 6, 2004. In 2007, the family moved to Seattle where the family still resides. David was loved by all who knew him. He never said an unkind word, was always willing to drop whatever he was doing to help, had an amazing intellect, yet was so patient with the rest of us who made many mistakes. But most of all David loved his family, and his two sons were the center of his world. David lived a life of love, generosity and kindness. His passing leaves a hole in all our hearts, but the beauty of his life will live on. David is survived by his wife Amy, sons Gabriel and William, parents Jerry and Betty Hoing, sisters Karla (Jerry), Kathy (Mitch), Brenda (Howard), Barbara, Jerri (Bryan) and cousin/sister Nancy (Don). Also surviving are parents-in-law Cecil and Judy Miller and sister and brother-in-law Kate and Wes Yoder. In lieu of flowers, memorial donations may be made to the Royal High School David Hoing Fund for Science Education.

The family of David W. Hoing created this Life Tributes page to make it easy to share your memories.