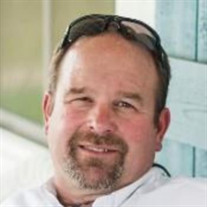 April 6, 1969 – September 15, 2020 On Tuesday, September 15, 2020, Darin Keith Hendrickson, loving husband, father, grandfather, son, brother, and friend passed away after a 13-month battle against pancreatic cancer with his loving wife by his side. Darin was born on Easter Sunday, April 6, 1969 to Doug and Deanna Hendrickson in Moses Lake, Washington. The oldest of two children, he was raised in Moses Lake where he graduated from Moses Lake Christian School in 1987. He then went on to graduate from Universal Technical Institute of Phoenix Arizona in 1988 with a degree of Diesel Technician-ASE Certified. He was born with great mechanical abilities. He used those abilities to work for neighboring farmers as early as 13 years old. From there he started his one man, one truck business from his parent’s personal shop. It was known as Agri-Fix Towing and Repair and is still operating today. During his career he was an active board member with the Towing and Recovery Association of Washington (TRAW). With a talent for establishing businesses, he currently owns and operated four of his five businesses in towing and repair currently employing thirty people and operating twenty-five trucks. In June of 2011 he married the love of his life, Amy Johnson. With their families combined they raised six children: Dustin Hendrickson (Ashley), Heather Seals (Bill), Heidi Flora (Stephen), Kassie Hendrickson, Jarrod Record, and Ashley Weston (Trevor). Darin loved to teach others. He trained beginners, molded others, and mentored some as they enhanced their skills, including his son. He was an educator for TRAW and shared his mechanical knowledge as well. He was also honored to teach at Big Bend Community College as the MLHS Auto Shop Instructor. He was a dedicated member, teacher, and volunteer of his home church serving on the boards and volunteering whenever he could. As the members became like family, he will be greatly missed. Since 1988 Darin has refereed basketball and mentored others while battling the cancer. He loved his life-long community and was very active in supporting it. He hosted athletes expanding their skills and exchange students who were broadening their education and cultural experiences. Marla and Fynn of Germany became family to all of us. Darin’s hobbies included ATV’s of all kinds, classic cars, Lego’s, Hockey, and supporting his 2nd amendment rights with his collection. Any time spent with family and friends was cherished by all involved. He had contagious ambitions and patience for others. Darin’s quiet demeanor and witty humor always had us laughing together. It was his determination and gentleness that truly showed his love. That love has continued to overflow and bless his wife and family. He is preceded in death by his grandfather Robert “Bob” Reffett and grandparents Art (Betty) Hendrickson. Not to exclude his faithful, furry German Shepherds. He is survived by his wife, Amy and their six children. His grandmother, Anna Gene Reffett, his parents, sister, Andra (Tim) Stredwick and seven grandchildren with many in-laws and out-laws including aunts, uncles, cousins, nieces, and nephews. Cherish those memories and remember his love. He is truly missed. A service will be held in his memory on September 20, 2020 at 2:00 pm (outdoors) at 1142 W. Ivy Street, Moses Lake, WA In lieu of flowers, make donations to Cancer Can’t and The Columbia Basin Cancer Foundation

The family of Darin Keith Hendrickson created this Life Tributes page to make it easy to share your memories.