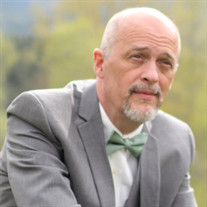 Daren Read Vernon was born on April 22, 1966, at 12:37 AM, in Moses Lake Washington, to parents Marvin R. and Nancee E. Vernon and was the youngest of 5 children. He was hosted into the world by Samaritan Hospital, and his debut address was 1040 Skyline Drive. Daren and three of his older siblings lived there until his parents moved the family to Redmond, Washington, when he was a year old. He spent most of his childhood in Puget Sound, living in Redmond and Issaquah and attending various grade schools and part of Junior High there. By the time Daren was around 12 years old, the family moved to Coos Bay, Oregon. While in Coos Bay, Daren met and forged a lifelong relationship with the Baxter Family, a close relationship that lasted until his death. After a year and a half, he and his parents moved to Newport, Oregon, where Daren attended Newport High School, and started college. During this time, he worked as a teller at the Bank of Newport, where his father was president. Daren attended Ricks College in Idaho until he graduated in 1989. He took some time off from college and fulfilled a Mission for The Church of Jesus Christ of Latter Day Saints, in Salt Lake City, Utah. He was formally released from his 2 year mission on January 7, 1988. After leaving college, Daren married his first wife, Jennifer Goodner, and moved with her to Philadelphia, PA, where he enrolled at Temple University of Podiatric Medicine. After he passed his boards, they moved to Houston, Texas, where he started his internship. Not long after, Daren received an offer from Dr. Waller in Moses Lake, to come and work at Basin Foot and Ankle. After his first marriage ended, he met and married Janelle V. Osborn. That marriage produced two cherished sons, Keston Read Vernon, on December 1, 1999, and Trenten Baxter Vernon, on April 14, 2002. He was hired by Samaritan Healthcare, in 1998, and worked at Samaritan Clinic until 12 days before his death, on February 3, 2019, at 12:12 AM, from Pancreatic Cancer. After his second marriage, Daren was single for a number of years when he met the love of his life. On April 29, 2017, he married Rebecca Eggleston Erickson, in Leavenworth, Washington. The last few years of his life were filled with travel, excitement, stage plays, tending his garden, and getting the most out of his remaining life with Becca. They were sealed for time and all eternity at the Columbia River Washington Temple on January 19, 2019. Daren sat on the board of the Washington State Podiatric Medical Association. He was very active in civic activities, worked on many musicals and starred in several. He helped to originate Basin Community Theater where he directed, danced, sang, acted and designed stage settings. He will be remembered by all who knew him for his dry humor and wit. His career and his patients meant everything to him and it hurt him greatly to have to quit. No one could have fought harder or been more accepting of what he could not change. The poise he showed to the end was immense. A funeral service will be held at the Church of Jesus Christ of Latter Day Saints at 1849 Nelson Road. Viewing will be from 11:00 AM to 12:30 PM, the service starts at 1:00 pm on February 16, 2019. Daren is survived by his wife, Becca, his three sisters, Wendy Coyne of Moses Lake, Gail Hanks of Tacoma, and Sandra Dowdney of Wenatchee, one brother, Randall Vernon of Snohomish, his two sons, Keston and Trenten and many nieces and nephews. Arrangements are in care of Kayser's Chapel of Memories.

Daren Read Vernon was born on April 22, 1966, at 12:37 AM, in Moses Lake Washington, to parents Marvin R. and Nancee E. Vernon and was the youngest of 5 children. He was hosted into the world by Samaritan Hospital, and his debut address was... View Obituary & Service Information

The family of Daren Vernon created this Life Tributes page to make it easy to share your memories.