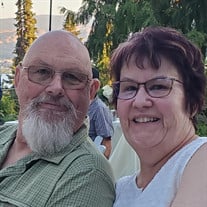 On December 5, Daniel Edward Sanders, beloved husband, father, brother, and friend, was called to his heavenly home. Dan was born December 18, 1956, in Bremerton Washington to Frances “Pete” and Mary “Doreen” Sanders. Dan spent his childhood hunting up on the Colockum, fishing and riding dirt bikes in western Washington. When he was fourteen, his mother Doreen passed away and soon after, he and his younger brother Shawn were joined by six stepsiblings when his father married Patricia “Pat” Sanders. Dan joined the United States Marine Corps in 1974, where he served in Force Recon, an elite group within the USMC. He remained a proud Marine until his death, a true testament to the phrase “Once a Marine, always a Marine.” In 1977, he and the love of his life, Mary Dean (Kent) eloped and were married in Las Vegas, NV. They made their home in San Clemente, CA where Dan was stationed at and deployed from the Camp Pendleton. In 1981, after he was honorably discharged from the Marine Corps, Dan and Mary Dean moved back to Washington State where they settled in and started their family. Oldest daughter Danna was born in 1984, followed by twins Maran and Brenna in 1989. During this time, Dan worked as a tactical security team leader at Hanford before moving on to his career as a truck driver, which allowed him to spend time observing wildlife throughout the west, something he enjoyed and often wrote home about. Dan was a hardworking, dedicated family man who never complained and was always willing to help those around him. He never met a stranger and loved sharing stories, whether it was from his own life or local Pacific Northwest history. He loved watching old BBC comedies, The Three Stooges, and Star Gazers on PBS and got his daughters hooked at an early age. One of the family’s most cherished memories is camping up at Taneum Creek, where Dan loved to sit by the campfire long after everyone had gone to sleep, so that he could watch the stars and observe the surrounding wildlife. Dan was an active member of the Moses Lake Presbyterian Church, where he continued to develop his relationship with God and enjoyed connecting with other church members during fellowship hour and church social events. Dan was preceded in death by his Father and Mother, Step-Mother, Father and Mother-in-Law, Sister-in Law Bonnie and Step-Sister Penny. He is survived by his wife of 44 years, Mary Dean; daughters Danna (JT) Murnyack, Maran, Brenna, son Joe; grandchildren Raleigh and Lillian; siblings Shawn (Diana), Rick (Valisa), Pat (Bobbi), Donald and Kenneth. The family will be organizing a celebration of life after the holidays.

The family of Daniel Edward Sanders created this Life Tributes page to make it easy to share your memories.