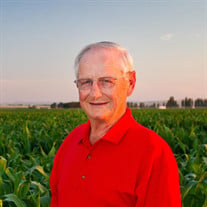 On Sunday, August 8, 2021, Dale Patrick Walker, loving husband of Cheryl, father of four, grandfather, great grandfather, former farmer, and Grant PUD Commissioner, passed away at the age of 75. Dale was born in Oceanside, California, to Ray and Helen Walker. The family moved to Moses Lake, Washington, in 1954 to farm as part of the Columbia Basin Irrigation Project. There his parents built their farm along the O’Sullivan Reservoir where Dale grew up raising livestock, gardening, being a member of the 4-H club and FFA, as well as hunting, and racing cars. He graduated from Moses Lake High School in 1964, and then attended Big Bend Community College. In 1966, he enlisted in the U.S. Army and served as an Armor Intel Specialist for two years, working on the M551 Sheridan tank. He returned to the Columbia Basin to begin farming on his own and married his beloved wife, Cheryl, in 1974. Dale grew many crops but specialized in wheat, owned his own seed company, and developed two varieties of wheat: Basin and Cashup. Later he worked as manager of the Golden Corral restaurant, and managed a satellite horse racing site at other restaurants in Moses Lake. Over the years he has pursued many hobbies including shooting pool, competing in blackjack tournaments, restoring vintage Corvettes, and golfing. Dale has been active in the community all of his life in many clubs and organizations, including Rotary, the Moses Lake RoundUp, and the Washington State Potato Commission. In 2010, Dale was elected as a commissioner for the Grant PUD, to serve in the Second District. As PUD commissioner, he also served on the boards of several state and regional electric industry organizations. Dale was instrumental in leading Grant PUD through a time of significant growth and development. He was a major proponent of the utility’s current initiative to extend fiber-optic service throughout the county and of developing financial policy that would pay down debt while keeping power rates low. He strived to ensure that all Grant PUD customers benefited from the tremendous growth in Grant County. Dale was preceded in death by his parents, Ray and Helen Walker. He is survived by his wife Cheryl; son Phillip Walker and his wife Kathleen; son Rodney Walker and his wife Nicole; son Ronny Walker; and daughter Emily Burke and her husband Todd; grandchildren Erin, Andy, Patrick, Christopher, Luke, Zachary, Mindy, Hannah, Josiah, Jared, Bailey, Izabelle, Annika, Oliver, and Magnolia; and great grandchildren Jaymeson, Kolbee, Arie, Sylas, and Dawson; and his siblings Charlotte Maletz, Priscilla Walsh, Lee Walker, and Gary Walker; and many cousins, nieces and nephews. A memorial service will be held on Friday, August 13, 2021, at Kayser’s Chapel of Memories, in Moses Lake at 1:00 pm. The service will be available to watch on Facebook live at https://www.facebook.com/Kaysers-Chapel-of-Memories-104201534614825 Please express your thoughts and memories for the family at www.kayserschapel.com

The family of Dale Patrick Walker created this Life Tributes page to make it easy to share your memories.