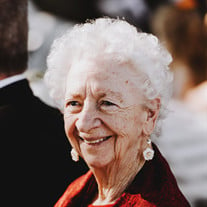 Constance Ruth Daily (Schaeffer) was born on March 10, 1933, at Schofield Barracks in what was then the Territory of Hawaii. Although they moved frequently while her father served in the Army, they settled in Seattle following his retirement after World War II. It was there that she met and married Earl Daily. They had two children, four grandchildren, and, at last count, four great-grandchildren. Connie had a few major loves in life: her family, her dogs, reading, gardening, and the Ladies Auxiliary of the VFW. Whenever there was a family event, she was there. If the kids or grandkids were playing in a game, or dancing in a recital, Connie was there. She never missed a soccer game. When we were growing up, our house was the place everyone came to hang out. Once the kids were grown, she spent most of her energy on the VFW, racking up thousands of hours of volunteer service and serving in a variety of leadership positions at the local and state levels. Her parents, husband, and brother (John Schaeffer) all passed before Connie did. Her daughter, Cindy Olsen (Daily), and Cindy’s husband Jeff still live in Edmonds. They gave Connie two grandchildren to love, Renee Goerke (Olsen) and Chelsea Berg (Olsen), and three great grandchildren to dote on, Caden and Teagan Goerke, and Emma Berg. Connie’s son, Patrick, and his wife, Ardith, recently moved back to Washington after a long stint in Texas. They also gave Connie grandchildren to brag about, Shannon Flaherty (Daily) and Christy FitzGerald (Daily). Shannon’s first child and Connie’s fourth great grandchild, Ethan Patrick Flaherty, was born just four days before Connie died. On August 28th, Connie finally lost her fight against Alzheimer’s Disease. Her service will be held at St. Andrew’s Episcopal Church, 111 NE 80th Street in Seattle on November 23, 2019 at noon.

Constance Ruth Daily (Schaeffer) was born on March 10, 1933, at Schofield Barracks in what was then the Territory of Hawaii. Although they moved frequently while her father served in the Army, they settled in Seattle following his retirement... View Obituary & Service Information

The family of Constance Ruth Daily created this Life Tributes page to make it easy to share your memories.