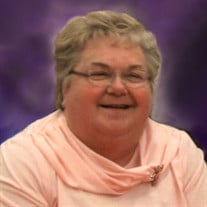 Connie Mae Kast Connie Kast, lifelong resident of Moses Lake, passed away Thursday October 18, 2018 at Samaritan Hospital due to heart failure. She was 63. Connie was born October 20th, 1954, daughter of Rueben and Darlene Ruff, in Moses Lake Washington. She was raised on Rueben’s farm with her older sister Ruby. Connie enjoyed sewing, arts & crafts, crocheting, cooking, canning, and baking. Later she was known as “The Cake Lady” for all of the birthday, wedding, and anniversary cakes she made for family and friends over the years. She was also actively involved in 4-H with her children. On June 23rd, 1973 she married Keith Kast and moved to Othello for a short time before moving back to Moses Lake. Connie worked at Payless for a while then spent some time raising her family. Later she worked at Wilcox Farms as an egg candler, Sterling Savings as a bank teller, Home Depot as a retail clerk, and then National Frozen Foods as a scalehouse attendant. Even though life kept throwing rock after rock and boulder after boulder at Connie, she remained strong and fought back with all she had. Connie was a strong woman that had been through so much but never gave up. Connie is survived by her son Kasey Kast of Portland, OR, and her sister Ruby Keenan of Othello, WA. She was preceded in death by her husband Keith, daughters Echo and Desiree. Her parents Rueben and Darlene Ruff, brother in law George Keenan, and nephew Kyle Keenan. We will say our final goodbye to Connie Thursday at 2 p.m. on October 25th at Lakeview Missionary Church, 810 S. Evergreen, Moses Lake. Viewing will be between 1 and 1:30 pm at the church before the service. Following the service, Connie will be laid to rest with her family at Guarding Angels Cemetery, 2595 Road L NE, Moses Lake. Please sign the online guestbook at www.kayserschapel.com Arrangements are in the care of Kayser’s Chapel of Memories.

The family of Connie Kast created this Life Tributes page to make it easy to share your memories.