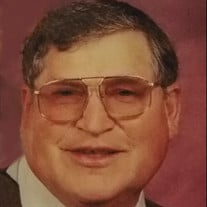 Clyde LeRoy Burns was born on January 18, 1939, in Nyssa, Oregon. He died on Wednesday, November 18, 2020 at Central Washington Hospital in Wenatchee, WA. Clyde was the youngest of 7 children born to Alvin J. Burns and Nevieve Beck. He went all through school in Nyssa and graduated high school in 1957. In November, 1958 he enlisted in the U. S. Army and served as a scout in the 15th Cavalry, 4th Armored Division until his honorable discharge in October of 1960. Clyde married Nora Sharon Hall in 1961. Of this union, 3 children were born: Anthony Preston, Deborah Jaye and Tori Reyann. They were together 14 years. On July 9, 1977 he married Judith Ann Rodgers, and within a year adopted both of her daughters, Corie and Jeannie. He resided in Moses Lake with his wife until his passing. Clyde was proud of his family history, and often liked to tell you about his paternal grandfather, Robert Emmett Burns who served in the Civil War and was a Police Judge in Dodge City, Kansas during the time of Bat Masterson. If you heard Clyde say, "I am the youngest son of the youngest son", take a seat and relax because it may take a while. After Clyde's army days, he went to work for Western Electric, a branch of AT&T. Later, he transferred to a position with Pacific Northwest Bell and served for 34 years as a telephone technician, mostly in the Central Office and later as manager of a local construction crew. He retired with 34 years of service in 1994 from what was then Qwest, now Century Link. Long employment allowed him the privilege of being a Life Member of the Telephone Pioneers where he was able to serve his community in many ways and held many offices. After over 20 years of retirement from "Ma Bell", he still loved to talk about his work that he enjoyed so much. His free time was spent mostly on one of the golf courses in the area, and he was currently a member of the Moses Lake Golf and Country Club. Usually, his time on the course was spent with his "best bud" Mike, "Gus", Harris as well as others. He was predeceased by his parents, and his 6 siblings: Velma, Edith, Glen, Deon, Fred and Edna. He is survived by his wife Judy, son Tony (Kelly), and daughters Debbie Burns, Corie Otto, Tori(Chad) Cutler, and Jeannie Olivas. His survivors also include 15 grandchildren and 26 great-grandchildren. Burial will be at Pioneer Memorial Gardens with a celebration of life to be held in the early part of 2021 when we hope to be able to gather safely. It was important to Clyde to support the local food bank, so if you like, a donation to CSML, P. O. Box 683, Moses Lake, in his honor would be appreciated.

Clyde LeRoy Burns was born on January 18, 1939, in Nyssa, Oregon. He died on Wednesday, November 18, 2020 at Central Washington Hospital in Wenatchee, WA. Clyde was the youngest of 7 children born to Alvin J. Burns and Nevieve Beck. He went... View Obituary & Service Information

The family of Clyde LeRoy Burns created this Life Tributes page to make it easy to share your memories.