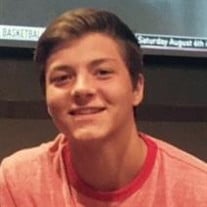 Clayton Lane Clark, 18, Moses Lake Washington passed away on August 22, 2016 surrounded by family and loved ones at Sacred Heart Medical Center in Spokane, WA. Clay was a talented athlete and began wrestling at the age of 4. He continued through high school and his love of the sport took him to several locations including Reno, NV where he competed in the World of Wrestling Championships with friends. He had and will continue to have great support from his wrestling family. Clay’s love of competition did not stop there. He was always challenging his family, especially siblings and cousins,in basketball games, monopoly and any backyard pick-up game he could find. Clay was always full of surprises, from the time his parents Eric and Melissa found out they were pregnant with him until the day he went to be with God. What was not surprising was his love for others and his ability to make people smile. He always was there to make his siblings laugh and support them as an older brother. He never turned down an opportunity to push boundaries and live life to the fullest. His friends describe him as loving, funny and kind-hearted. He continued this trend even in passing. Clay made the decision to be an organ donor and will continue to make others smile for years to come. Clayton is survived by his loving mother and father, Melissa Klitzke and Eric Clark. His siblings, Madisyn Clark, Kanyon Asher and Maycee Clark. Grandparents, Mark and Roxanne Clark and Kent and Terri Klitzke. Great-grandparents Larry and Fay Ann McCourtie, Carol Klitzke and Betty Kurkowski. Aunts and uncles Robert and Heather Klitzke, Travis and Jody Clark, Spence and Robin Klitzke and Angela Clausen. His cousins, Brock and Brooklyn Clark, Makenna, Emma and Wade Klitzke. Services for Clayton will be held at Moses Lake High School on Saturday, August 27th 2016 at 1pm. Immediately following will be a graveside service at Guarding Angels Cemetery, 2595 Road L NE. Funeral arrangements are being provided by Kayser’s Chapel of Memories. Please sign the online guestbook at www.kayserschapel.com A special thank you to everyone in the community that has supported the family during this time. Hemingway wrote, “Do not go on trips with anyone you do not love.” Clay was looking forward to traveling the world and his family hopes you can honor him by taking him with you wherever you go.

Clayton Lane Clark, 18, Moses Lake Washington passed away on August 22, 2016 surrounded by family and loved ones at Sacred Heart Medical Center in Spokane, WA. Clay was a talented athlete and began wrestling at the age of 4. He continued... View Obituary & Service Information

The family of Clayton Clark created this Life Tributes page to make it easy to share your memories.