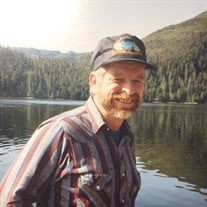 Clarence Leldon Hayes 77, of Moses Lake, went to be with the Lord on April 7, 2017 at Confluence Health Hospital in Wenatchee, WA Celebration of Life Services will be held on Friday April 21, 2017 at 2 pm at Kayser’s Chapel, 831 South Pioneer Way, Moses Lake WA 98837 Please sign the online guestbook or share a memory with the family at www.kayserschapel.com Arrangements are in care of Kayser's Chapel & Crematory. Clarence was born in Yelm, WA on February 4th 1940 to Gano and Elizabeth Hayes. Life in Yelm was freedom for Clarence, he grew up riding his bike, causing a bit of trouble (which his dad quickly corrected any time he was caught) and the outdoorsman in him was just beginning to bud. During his days at Yelm high school he was working on his “charming” skills while being co-captain of the varsity football team. In 1959, his senior year, he was voted in as class president although he could have held a second title as class clown. After honing his skills for life, he entered what would be his lifelong passion and career, Washington Fish and Wildlife. Expanding his love of family, Clarence and his first wife Sharon added three beautiful children to his life. As a lifelong Washington resident, diving in the Puget Sound was a hobby he enjoyed and he was also able to turn it into a job for a short period of time. In 1980, Clarence met Darlene and was able to utilize those finely tuned “charming” skills to convince her to marry him in 1986 where he then acquired three more children adding more excitement than sometimes he wanted to his life. Clarence loved posting his “word of the day” all over the house trying to expand everyone’s vocabulary. He would have retired in Alaska if he could have convinced Darlene to go with him, instead he settled for long drawn out hunting trips to Montana with buddies. Clarence is preceded in death by son Christopher Hayes, brother Jess, mother and father. Clarence is survived by his Wife: Darlene Hayes, Son: John Hayes, Daughter: Edith Hayes, Step Daughters: Charlene Halbach, JoDee and husband Mike Hickey, Tonya Hanna and fiancé Robert Lowe, Grandchildren: Nicole Hayes, Sarah Hayes, Aubrey Hayes, Dera Crosby, Thresa Reed, Douglas Yurian, Justin Pelham, Jacob Hickey, KarLee Pelham, Jasey Mease, Great Grandchildren: Mallory, Easton, Kalobe, Olivia, Nathan, Averi, Randi Mae, Paxton Memorials may be given to www.gofundme.com/clarencehayes in memory of Clarence; the money raised will go to finding a cure for Dementia. The family of Clarence Hayes wishes to extend our sincere thanks to the staff on the third floor of Confluence Heath Hospital in Wenatchee Washington for the outstanding care. Thank you to Dr. Kendall Blair and the cardiologist team. We also wish to thank the Chaplin, Jamie, for helping us through one of the most difficult days of our lives.

Clarence Leldon Hayes 77, of Moses Lake, went to be with the Lord on April 7, 2017 at Confluence Health Hospital in Wenatchee, WA Celebration of Life Services will be held on Friday April 21, 2017 at 2 pm at Kayser&#8217;s Chapel, 831 South... View Obituary & Service Information

The family of Clarence Hayes created this Life Tributes page to make it easy to share your memories.

Clarence Leldon Hayes 77, of Moses Lake, went to be with the...