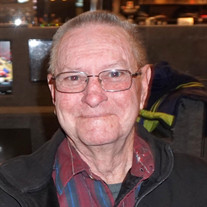 January 16, 1932 – June 12, 2017 Our beloved, Charles L. Richard, 85, of Moses Lake, WA, passed away suddenly at Samaritan Hospital with family by his side on June 12th, 2017. Charlie was born on January 16th, 1932, in Humnoke, AR. He was the only child of the late Lottie Bernice Brown. He was a member of the National Guard and served proudly. He worked in various trades before landing in the hotel management field. He raised four daughters and was a wonderful father. He retired in 1997 and moved to Moses Lake where he enjoyed spending time with his family, fishing, camping, and hunting. Charlie loved the Oregon Coast, where he took his family every summer for over forty years. He was a lifetime member of the Masons and an honorary member of the Lioness Club of Moses Lake. He leaves behind his loving wife of sixty years, Marcella Richard; four daughters, Charlyne Clark, of Vancouver, WA; Sandy (Mike) Melbye of Moses Lake, WA; Kathy Mokler of Kennewick, WA; and Vivian Richard of Moses Lake, WA; five grandchildren, Aaron (Amanda) Clark of Ridgefield, WA; Amanda (Brandon) Gregory of Vancouver, WA; Jennifer (Kirk) Baker of Issaquah, WA; Brian (Crystal) Melbye of Moses Lake, WA; Melissa Mokler of Kennewick, WA;and twelve great-grandchildren. He is preceded in death by his mother, Lottie Bernice Brown; father, John Calvin Brown; son-in-law, Matt Mokler; and two grandchildren, Lecia Ann Richard and Thomas Calvin Melbye. He was a dearly beloved husband, father, grandfather, and great-grandfather who will be greatly missed. A celebration of life gathering will be held at 12:00pm on June 17th, at Connelly Park. In lieu of flowers, donations can be made to: The Lioness Club of Moses Lake, P.O. Box 21, Moses Lake, WA 98837. Please sign the online guestbook or leave a note for the family at www.kayserschapel.com Arrangements are in care of Kayser's Chapel & Crematory.

The family of Charles Lee Richard created this Life Tributes page to make it easy to share your memories.