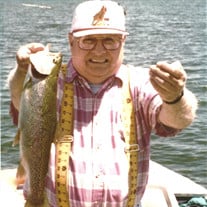 Charles (Chuck) Riley Pearson Sr was born March 10, 1936to Riley and Eva Pearson at the Columbus Hospital in Columbus, Montana. He has a sister Shirley Watson, and brothers, Lyle and Gary Pearson.During his youth, Chuck worked on the family ranch helping plant and harvest hay; and feeding cattle in Fishtail, Montana. He started school in a one room school house in Fishtail, when they closed that he finished grade school in Absarokee. He attended high school in Harlowton where he played football. Chuck joined the National Guard in 1954 and served two years. He then joined the Air Force andwas Honorably Discharged in 1961. On February 28, 1959, Chuck married Frances Stroh . They had their first home together in Great Falls, MT, where their first child was born, Teresa. After leaving the Air Force they moved to Missoula. While living in Missoula they had three more children; Charles Jr, Cynthia, and William. Chuck moved the family to Sweet Home Oregon in 1969, when he started working in Halsey at the pulp mill. He worked there until he retired in December 1996. Chuck enjoyed spending time with his family the most. His time off always included a drive, a camping trip or a fishing trip. A favorite was the yearly trip to Crane Prairie. Over the years, several nieces and nephews were able to join the family for boating, swimming, and homemade ice cream. Chuck and Fran traveled the United States in their motorhome. They usually traveled with a cousin or two or they would meet up at destination as a group. He also enjoyed rock hunting and lapidary in his later years. Over the years he was a member of several organizations, which include the Moose Lodge, the Elks and the Sweet Home Masonic Lodge. On March 13, 2017 Chuck was greeted in Heaven by his brother, Gary, and his parents. He left behind his brother, Lyle and sister, Shirley. His wife, Fran and children, Terrie and Lester Mather, Chuck and Debbie Pearson, Cindy and Gary Mathis, and Bill and Dani Pearson. There are 13 grandchildren and 8 ½ great grandchildren. Graveside services will be held on April 7 at 2:00 PM at Gilliland Cemetery in Sweet Home, Oregon with a Celebration of Life afterwards at the Elks in Sweet Home.

Charles (Chuck) Riley Pearson Sr was born March 10, 1936to Riley and Eva Pearson at the Columbus Hospital in Columbus, Montana. He has a sister Shirley Watson, and brothers, Lyle and Gary Pearson.During his youth, Chuck worked on the family... View Obituary & Service Information

The family of Charles Pearson created this Life Tributes page to make it easy to share your memories.