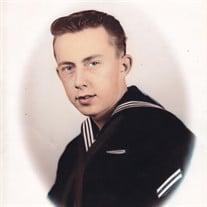 Charles Darrel Hayne, passed away on March 31, 2019 in Moses Lake, Washington. He was born July 5, 1940 in Bozeman, Montana to Charles and Helen Hayne. He married Sharon Haubold in 1961, in Denver, Colorado. His service in the Navy, from 1957 to 1967, took him around the world and were some of his best memories as Radioman 1st Class. He began his 32 year career with Pacific Northwest Bell (US West) in 1967, in Seattle, Washington and raised his family there and in the Lakewood and Marysville areas. His career took him to Rock Springs, Wyoming and finally to Billings, Montana where he retired to travel with Sharon in the adventures of RV lifestyle. Taking life easy was not his thing. He loved working with his hands and he enjoyed constructing living structures and landscaping, just as he had done for most of his life. His greatest love was going fishing with his boys and golfing with the family. In 2003 he and Sharon went to work at Crazy Horse Memorial in Custer, South Dakota where for 7 years he took part in the remodeling of the buildings there and making new and wonderful friends and memories. It was where we decided to put down roots, to construct the home of our dreams. Chuck’s ultimate reward in life were his four children. He is survived by his wife Sharon, of 58 years of love and devotion. His daughters Erica (Dave) Holland of Orofino, Idaho, Stefanie Curry of Orofino, Idaho; his sons, Tyler of Pasco, Washington and Gregory of Marysville, Washington; his grandchildren Ashley, Dillon, Zachary, Nicholas, Christopher; great-grandchildren Trystan and Landon; sisters, Mary (Parky) Kerr, Maxine Jenft, Cindy (Bill) Repp, brother-in-law Gary (Shirley) Haubold of Port Angeles, Washington and many nieces and nephews. He was preceded in death by his beloved parents, brothers Gary and sisters Iris and Judy. A memorial service will be held during Memorial weekend on Sunday, May 26, 2019 at 1:00 p.m. at the Victor, Montana Memorial Garden Cemetery. Contributions suggested to American Cancer Society.

Charles Darrel Hayne, passed away on March 31, 2019 in Moses Lake, Washington. He was born July 5, 1940 in Bozeman, Montana to Charles and Helen Hayne. He married Sharon Haubold in 1961, in Denver, Colorado. His service in the Navy, from 1957... View Obituary & Service Information

The family of Charles Darrel Hayne created this Life Tributes page to make it easy to share your memories.