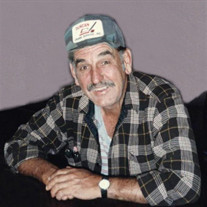 Charles (Chuck) Leslie Woodruff, 77, of Moses Lake, Washington, passed away on Saturday, January 6, 2018. He was born to Lola (Ola) Mae(Garrett) Woodruff in Salado,Arkansas, on Oct. 31,1940. Chuck grew up on a small farm in Arkansas under the care of his grandparents Charles Edgar Garrett & Martha Elizabeth Sherrill while his mother Ola was away working to support her family. In 1945 Ola married William Oldridge & at the age of 5, Chuck, Ola & William (Bill) moved to Walla Walla,Washington. In 1951 they moved to Moses Lake. At the age of 15, Chuck saved enough money to buy his first car, a 1947 Plymouth. Chuck graduated from Moses Lake High School June 1959. In 1961, Chuck relocated to Los Angeles, CA to join the military & served until 1963. He then moved to Oklahoma & eventually moved back to Moses Lake with his cousin Tommie Whitecotton. Jobs were hard to find in M.L. so they both moved to Bloomington, Illinois for one & a half years & then Chuck returned to M.L. to work in a freight yard. In 1965 Chuck began his career as a Surveyor for the Bureau of Reclamation. He was very proud of his role as an Inspector on the Bacon Siphon Tunnel Project. Chuck enjoyed fishing, hunting, western movies, 50's & 60's rock-n-roll music & spending time with family & friends. On April 1970, he married Inez Guel & embraced her 4 children. They had a son Mark Allen Woodruff born Dec. 1,1970. His children will always remember him as an honorable, strict but fair father who treated his children equally. He will be remembered for his big smile, upbeat & happy nature. Chuck was always hard working, responsible & a good provider for his family. Although he had his health challenges, he always maintained a positive attitude. He has always loved & respected his family from a young age. Chuck is survived by Inez Woodruff (divorced) & a good friend up until his passing, Cosme Guel, Norma McGrew, Maggie Guel, Cindy Bohn (Marty), 5 grandchildren, 6 great grandchildren, sister Mary Belle Blake, brother Darrell Oldridge & sister Valerie Sue Boston. Chuck is preceded in death by son Mark Allen Woodruff, his mother & father and his grandparents. A memorial service will be held January 11th at Kayser's Chapel of Memories, viewing from 11-1:00 p.m. & service at 2:00 p.m. A reception will be held at the Nelson Road LDS Chapel following the graveside services.

Charles (Chuck) Leslie Woodruff, 77, of Moses Lake, Washington, passed away on Saturday, January 6, 2018. He was born to Lola (Ola) Mae(Garrett) Woodruff in Salado,Arkansas, on Oct. 31,1940. Chuck grew up on a small farm in Arkansas under... View Obituary & Service Information

The family of Charles "Chuck" Woodruff created this Life Tributes page to make it easy to share your memories.