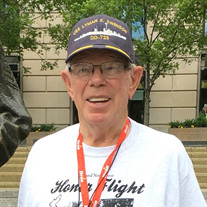 Charles (Chuck) Raymond Millspaugh was born in Martin South Dakota to Earl and Gladys Millspaugh on December 22, 1932. In 1944 Chuck's family moved to Rockford, WA with everything they owned in a 1935 ford with a board on the back holding the washing machine.. Chuck graduated from Rockford High School, and then attended Eastern Washington University in Cheney, and graduated from Kinman Business University with a Masters in Accounting. Chuck joined the Navy in 1951 and proudly served during the Korean War on the SS Lyman K Swenson and the USS McCoy Reynolds with honorable discharge in 1955. Chuck married the love of his life, Alice Mangis, on June 22nd 1957 in Coeurd A’lene Idaho. Chuck and Alice moved to Seattle Washington, then to Spokane Washington, and spent a short time in Montana. They settled in Moses Lake in 1973 opened and operated a family owned business Chuck’s Sewing Center until 1984. Chuck retired from the Port of Moses Lake in 1998. Retirement allowed Chuck and his wife to travel around the United States, settling with a home in Moses Lake and a winter home in Quartzsite, AZ. Chuck was a member of the Church of Jesus Christ of Latter Day Saints, where he enjoyed his service in many church positions some of which included Scoutmaster, Stake Employment Specialist and Branch Missionary. He also served as a Counselor with three different Bishops in Moses Lake and he and his wife served two missions at Cove Fort in Utah. He is survived by his wife Alice of 59 years, his daughter Cheryl and husband Chuck of Post Falls Idaho, Son Steven and wife Sandy of Moses Lake, six grandchildren: Jason Fairbanks and wife Jennifer of Seattle Washington, Rachelle Proctor and husband Jeremy of Deer Park Washington, Cody Chongaway and wife Mikayla of Post Falls Idaho, Stacy Strauser and husband Joe of Jackson Missouri, Amanda Millspaugh of Moses Lake, US Army SPC Chad Millspaugh serving at Fort Hood Texas, and thirteen great grandchildren. He is also survived by two sister in laws, Rosemary Millspaugh of San Diego California and Cheryl Millspaugh of Spokane Washington, and numerous nieces and nephews. Chuck was preceded in death by his parents, three brothers: George, Nels and Ralph, and one sister: Gladys. Funeral services to be held on Tuesday July 26th 2016 with viewing from 9:00 to 9:45, service starting at 10:00am at The Church of Jesus Christ of Latter-day Saints Rose Street Chapel followed by a burial service at the Veteran’s Memorial Cemetery in Medical Lake Washington with full military honors at 1:30pm. Please sign the online guestbook or leave a note for the family.

Charles (Chuck) Raymond Millspaugh was born in Martin South Dakota to Earl and Gladys Millspaugh on December 22, 1932. In 1944 Chuck's family moved to Rockford, WA with everything they owned in a 1935 ford with a board on the back holding the... View Obituary & Service Information

The family of Charles "Chuck" Millspaugh created this Life Tributes page to make it easy to share your memories.