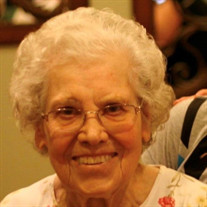 In Loving Memory of Cece Hansen September 7, 1927 – August 14, 2020 Cecilia (Cece) was born in the Haffner family home in Keenesburg, Colorado on September 7, 1927. She was the thirteenth child born to a family of seventeen children born to German parents from Cana, Russia. Her parents, Fred and Elizabeth Haffner immigrated from Russia and settled in Colorado in 1912 where her father became a beet laborer. By the time that Cece was born in 1927, her family owned a beet farm and everyone was required to work together to survive. Her first experiences in the beet field began at the age of six. Her job was to thin the beets after her mom blocked them with a common hoe. Her large family worked their way through the Great Depression by living off of the food they produced on the farm and buying their few clothes from the Salvation Army store. When Cece started school at age seven she did not have any shoes. When the school principal suggested that she come to school barefooted, her Dad somehow found some shoes for her to wear. The size of the family and very modest living conditions caused labels to be attached to this large family by the more affluent kids in the community. Cece often recounted her personal challenges of inferiority that she experienced early in life and how she had to fight to overcome these. Cece had a favorite teacher in the fourth grade that influenced her and built the confidence in her to develop her academic skills. Miss McCandless and then later a friend, Dorothy Baldwin, encouraged Cece to step out and pursue something outside of the farm. Cece’s first job was at the telephone company and she never returned to the farm. She worked hard to be able to go on to college. In 1969 Cece graduated from Colorado State College and become a grade school special-education teacher in Brighton, Colorado. The remainder of her teaching career was at Harborview Elementary in Juneau, Alaska. Cece had met Wesley and Hazel Hansen during her first time in Alaska and then became reacquainted with Wes when she moved back to Juneau to teach school. Wes had become widowed in 1967 and was raising Roland (17) and Renee (11) on his own in Juneau. Roberta and Sharilyn, his other children were adults and living in other cities. Wes and Cece married in 1971. She became a wife and instant mother at age 44. Cece was drawn to helping children with challenges. Her childhood challenges played a part in the compassion she had for children and this was evident throughout her lifetime. As a young woman she traveled to far off Alaska to work in the Juneau Children’s Home. This home was filled with Alaska native children who were wards of the state and “Aunty” and Lyle Johnson who led this home mentored Cece. She loved being a teacher and focused on children that had special learning needs. She served in the church as a Sunday School teacher and seemed to always find a neighbor child that needed a little extra support and care. Wes and Cece would always make sure that whoever needed a ride to church or to the doctor were assisted. I’m sure that this is why Wes would always buy a station wagon with lots of seats. Cece enjoyed hosting all of the friends that Wes would bring home for dinner, and she was an excellent cook and entertainer. She was known for her famous strawberry sourdough waffles and delicious pies. The family table was often filled with friends that would find themselves alone if it were not for Wes and Cece. Wes and Cece made a life in Juneau, Alaska until they retired in 1987 moving south to Warden, Washington where Roland’s family lived. This was their home until Wes passed in 2003. Cece moved out of their home and to Kennewick, Washington where she lived near her two sisters, Thelma Hillsten and Esther Cooper. She also spent seven years living near Renee in Issaquah following a broken hip injury. In 2017 she moved back to Kennewick where she lived until her death on August 14, 2020. Cece passed away at age 92 from complications from Alzheimer’s disease. She will be missed by her four step-children, Roberta Compton of Warden, WA, Sharilyn Erickson of Soldotna, AK, Roland and Mary Hansen of Warden, WA and Renee Hipp of Kirkland, WA, 12 grandchildren, 26 great-grandchildren and 5 great-great-grandchildren. Cece would often say how she was blessed with children and grandchildren and never had to have one of her own. Cece lived a full and long life. Three sisters Esther, Thelma and Rachel survive Cece. She was proceeded in death by her husband, Wesley Hansen, her parents Fred and Elizabeth Haffner, her brothers, Fred, John, Edward, Walter, Jake and Alex as well as her sisters, Hilda, Marie, Edith, Ann, Elizabeth, Lydia, and Martha. A memorial is set for September 26, 2020 at her gravesite in the Mansfield, Washington cemetery. We welcome family and friends to join us at the gravesite at 11:00 AM or at Rotary Park, 1810 Maple St, Wenatchee, Washington for a potluck at 2:00 PM. In lieu of flowers the family has set up a memorial fund at Warden Assembly of God where Wes and Cece were members and faithful daily 6 AM prayer warriors at the church. Donations may be sent to Warden Assembly, 416 South Oak Ave, Warden, WA 98857. The family will be planting a tree in Cece’s memory at the church. Cards may be sent to the family c/o Renee Hipp, PO Box 2727, Issaquah, WA 98027.

In Loving Memory of Cece Hansen September 7, 1927 &#8211; August 14, 2020 Cecilia (Cece) was born in the Haffner family home in Keenesburg, Colorado on September 7, 1927. She was the thirteenth child born to a family of seventeen children... View Obituary & Service Information

The family of Cecilia "Cece" Hansen created this Life Tributes page to make it easy to share your memories.