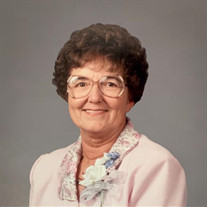 Carolyn Lenore Dutton, beloved wife, mother, and grandmother, entered into rest on Jan 14, 2020 at the age of 89. Born on October 18, 1930, in Hay, WA, she was the youngest of seven children born to Isaac and Claire Moore. After she lost her father at the age of 3, her family continued to live on their farm until they moved to Kahlotus, WA, where she graduated High School in 1949. She married Frederick “Ted” Beckner in 1948, and together they had four children. They spent their beginning years in Montana and eventually settled in Washtucna, WA, on the Beckner family farm. Carolyn, with an incredible work ethic, was an example to everyone who knew her, especially through the years she spent as a single mother. Throughout her employment of 27 years with the Corp of Engineers, she never missed a single day as a fish counter (biological aid) and utility person at Lower Monumental Dam near Kahlotus, WA. On January 5, 1974, she married the love of her life, John “Jack” Dutton, and she spent the rest of her 46 years enjoying every minute with him. Their love was evident, always holding hands when they walked together, teasing and joking with each other, and rarely being apart. Continually there for her, Jack took care of her until her last moment on Earth. Family was of the utmost importance to her, and their home was always overflowing with love. Through her example, she showed us all how to be selfless and giving, to have a great sense of humor, and to achieve all we want in life. All of her activities revolved around her husband, children, and all her generations of grandchildren. This included teaching her family to fish, crochet, can food, swim, play cards, cut wood, and to love and accept others unconditionally. Playing bingo, spending summers in the pool, and playing various board and card games were some of her favorite things to do. Her love of camping was shared with her family, as many trips to Tucannon River are etched in her family’s memories. In the last several years, she and Jack were able to enjoy many vacation trips to various destinations from Alaska to Mexico and more. Carolyn is preceded in death by her parents, six siblings, son Leonard Dutton, daughter Sherie Landry, granddaughter Dawn Beckner, and grandsons Jerimyah Jones and Jaime Kissler. She is survived by her prolific family, which consists of her loving sweetheart, Jack Dutton; children James Beckner, Linda (Robert) Henderson, Denise Beckner, Donna Goude, Vicki Dutton, Sue (Barry) Decker, Jerry (Mary) Sloot, Ron (Paula) Sloot, and Renee (Ed) Mann; as well as 41 grandchildren, 75 great-grandchildren, and 2 great-great grandchildren plus one bun in the oven.

Carolyn Lenore Dutton, beloved wife, mother, and grandmother, entered into rest on Jan 14, 2020 at the age of 89. Born on October 18, 1930, in Hay, WA, she was the youngest of seven children born to Isaac and Claire Moore. After she lost... View Obituary & Service Information

The family of Carolyn Lenore Dutton created this Life Tributes page to make it easy to share your memories.