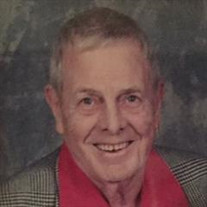 Carl N. Thompson, a long time resident of Moses Lake was called home by his Lord on Wednesday, February 15, 2017 (his 94th birthday) with family at his side. Funeral services will be held at 11am, Friday February, 24, 2017 at Kayser’s Chapel of Memories. Carl was born and raised in South Dakota, where his dad eked out a living off the land. Life was not easy and Carl had many stories to share of those days. He met the love if his life, Minnie Dixon, at a dance in Miller, SD and they were married in 1942. After the war, and his release from the Army, Carl worked various construction jobs. In 1950, Carl received a call from a contractor offering him a job building homes on an Air Force base in a place called Moses Lake, WA. So he and Minnie loaded up their young children, Carla and Jim, and moved west. Everything they owned was packed in a 33 foot trailer and towed behind their 42 Chevrolet. According to his stories, it was quite a harrowing trip at times. Once they arrived, they parked their trailer and made it their home in a small court where Michael’s on the Lake now sits. Family and faith were at the top of Carl’s list. He always put his family first. For example he coached youth baseball for many years. When grand children came along, he once again spent countless hours following the kids in their activities and sports. Their church family also meant a great deal to them. He and Minnie were among the founding members of Grace Lutheran Church. Both Carl and Minnie worked very hard and by 1969, they were able to open Basin Lumber. He drew up the plans for a home at no cost and hoped the customer would buy the building supplies from him. Most did, but a few did not. The business grew and in 1981, he got an offer he couldn’t refuse from Copeland Lumber to sell the store. This allowed them to travel and enjoy the retired life. Carl became quite the golfer, playing nearly every day. He even managed to get a hole in one – 2 times. Even though active participation became difficult, Carl remained an avid sports fan and followed his favorite teams daily. It can be said that Carl Thompson was ever a man of great integrity, where faith was his guiding factor. His was definitely a life lived well. He is survived by his children Carla Anderson (Bob), Moses Lake and Jim Thompson (Cheryl), Moses Lake; his grandchildren Lisa Prosser (Mark) Tumwater, WA, Dina Ashcraft (Rob), Leavenworth, WA, Bobbi Lloyd (Chris), Moses Lake, Jason Thompson (Brittaney) Hamilton, VA, and Arin Swinger, Moses Lake, along with 11 great grandchildren. In lieu of flowers , the family suggests that memorials be made to Apostolic Lutheran Church, PO Box 2439, Moses Lake, WA 98837 or Moses Lake Youth Baseball, 1397 Rd C NE, Moses Lake, WA 98837

Carl N. Thompson, a long time resident of Moses Lake was called home by his Lord on Wednesday, February 15, 2017 (his 94th birthday) with family at his side. Funeral services will be held at 11am, Friday February, 24, 2017 at Kayser&#8217;s... View Obituary & Service Information

The family of Carl Thompson created this Life Tributes page to make it easy to share your memories.