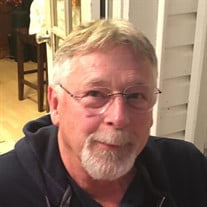 Carl Harry Cook, 72, went on to glory January 31, 2022, after an unexpected heart attack. Carl was born in Napa, California, and spent many years in San Jose and surrounding areas. He was a long-time resident of Washington State and made his home in Moses Lake these past years. He was preceded in death by his parents Freda Lois Brewer and Carl John Cook and is survived by his five children: Jennifer Hatch, Melaine Gravatt, Jeremy Cook (McKenzie), David Cook, and Christy Mendoza (Steven); eight grandchildren: Danelle, Rebecca, Nicole, Jason, Vincent, Christian, Lucas, and Olivia; two great grandchildren: Reagan and Saylor; three sisters, Adela, Pamela, and Sherry-Lee along with numerous nieces and nephews. Carl honorably served his country with distinguished service in the United States Army as a Specialist 4 for the 566th Medical Company (Ambulance) during the Vietnam War. It was during his time in the Army that he found a love for working on vehicles, especially Model T’s, jeeps, and pickup trucks. He spent many years as a machinist before developing a passion for flying and becoming an airplane mechanic. His vibrant personality and mechanic abilities will be greatly missed at Rainbow Flying Service. Carl was a believer in Christ, with a lifetime of service at various churches and was a current member of Moses Lake Christian Church. When not working on cars or airplanes, Carl enjoyed camping, hiking, building model kits, watching movies, or working on his property. He was creative, artistic, had a great sense of humor and was rarely without a harmonica. No funeral or memorial service is immediately planned. The family will notify loved ones in the future when a celebration of life has been scheduled. While his failing heart took him from this world, his generosity and willingness to help others with a huge heart for service will forever be remembered. He will be greatly missed by all. In lieu of flowers, donations can be made to the Honor Flight Network or the American Heart Association. https://www.honorflight.org/ https://www.heart.org/

Carl Harry Cook, 72, went on to glory January 31, 2022, after an unexpected heart attack. Carl was born in Napa, California, and spent many years in San Jose and surrounding areas. He was a long-time resident of Washington State and made his... View Obituary & Service Information

The family of Carl Harry Cook created this Life Tributes page to make it easy to share your memories.