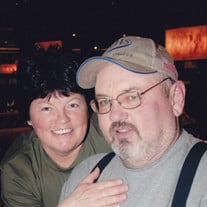 Calvin A Steele, 63, of Moses Lake, Washington passed away peacefully in his home on July 14, 2019. Calvin was born February 29, 1956 to Bill and Colleen Steele in Othello, Washington. He graduated from Moses Lake High School in 1974 and was an outstanding wrestler. For years he had been employed by Cole Farms (Ivan and Doug Cole) and Dolittle Sitmore Farms (Danny Litowitz). Reflecting on Calvin’s life. He was kind, humble and very soft spoken, he always had time for giving you a moment or two of his time. He was a true farmer who worked hard, he loved to drive tractor. He never was one to complain about how old or new the tractors were, he would just drive anything nobody else wanted to drive. Just get the fields ready. A breadwinner who provided, a husband who loved his wife and best friend, Dianna. A father who loved his children with no judgement. A neighbor who helped in any way he could to make you laugh and have a wonderful day. Over the last few days there was no talk of extraordinary achievements or spectacular events, there was just talk about the man, Calvin Steele. His love for farming, NASCAR, fast cars, Cold Beer and his family and dear friends. He was a simple man, never asking or needing much. A warm place to sleep and food, and he was happy. Calvin’s greatest possessions were his dignity and honesty. He cherished all of his children, each and every one of them. He loved watching NASCAR on weekends with Monte. Doing crazy school projects with his children. He will be very much missed. Calvin is survived by his wife Dianna Palmer (Steele); his children, Douglas, Kimberly, Elizabeth, Nelson, Rosalie and Manny. His special granddaughter Madelynn. Also Cole and Ryder and Grandma Bush. His siblings and their spouses, Rodney and Betsy, Steve and Tracy, Rosie and her dear friend Mary and many nieces and nephews. He was preceded in his death by his parents Bill and Colleen Steele, sister Brenda Steele and his daughter Sofia Palmer. A special thank you to Van Dyke and Cedergreen Farms where Calvin was currently employed. Calvin was very proud to work with such a wonderful crew on the farm. There will be a memorial service held at Kayser’s Chapel of Memories, 831 S. Pioneer Way, Moses Lake, WA on Friday, July 26, 2019 at 1:00 p.m. The family invites you to join them for a celebration of life at the home of Kimberly and Cole directly following the service. Please R.S.V.P. to Kimberly at (509) 361-8730. Donations to the family may be made at http://gf.me/u/t5b3s3

Calvin A Steele, 63, of Moses Lake, Washington passed away peacefully in his home on July 14, 2019. Calvin was born February 29, 1956 to Bill and Colleen Steele in Othello, Washington. He graduated from Moses Lake High School in 1974 and was... View Obituary & Service Information

The family of Calvin Arthur Steele created this Life Tributes page to make it easy to share your memories.

Calvin A Steele, 63, of Moses Lake, Washington passed away peacefully...