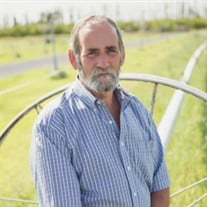 Third-generation “Moses Laker” Calvin David McDowall was born at Samaritan Hospital in 1955 to Harry and Arlene McDowall, when the Columbia Basin was being built out of sand and sagebrush. Raised on a dairy farm like the one of his grandparents, who “came here with the water,” Calvin continued the building as contractor in the Basin most of his life, as well as operating a farm, passing the values of hard work and family devotion of his parents along to his own children and grandchildren. As a young man Calvin reflected the early Basin’s “wild west” individualism and “go for it” attitude that only gradually mellowed over the years as he grew to love teaching the things he’d learned along the way. In 1983 he met the love of his life Casey. They married in 1984 and started creating an amazing life for themselves and their kids. From boating, to camping, to farm fun it was always an adventure with him. With contracting came trucks and big machinery, which Calvin enjoyed immensely. He felt most comfortable being on the move, rolling in his pickup, riding four-wheelers, meeting up with his family for lunch while they camped, and his Friday lunch dates with his brother Neil. Calvin liked to be busy, and if there wasn’t some sort of operation at hand, he’d get one (or three) going, as is the nature of a successful family farmer. As his children grew up and the grandchildren started coming, Calvin built a house big enough to host his entire extended family and reveled in the voices of his grandchildren, whom he sought to spend time with every day. As gruff as he was his grandchildren melted his heart. Calvin passed peacefully in his sleep Nov. 12, 2021. He is survived by his wife Casey, daughters Kelly (Bryan) Dowland, Brandy (Travis) Grigg, and sons Corey (Jaime) Mayer, Gordy (Simone) Hampton, and Cody (Heather) McDowall. His twelve grandchildren are: Kobi and Peyton Dowland: Corbin, Sheldon and Ivy Grigg: Kaylin and Dylan Hampton: Sawyer, Ellie and Chad McDowall; and Trenton and Bryson Mayer. He is also survived by his three siblings: Deborah Marchmonte, Neil McDowall and Susan Knowles. Calvin is the first to pass of 15 cousins, all grandchildren of Lenora Hansen, one of the matriarchs of early Moses Lake. Services will be held on November 20th, 2021, 11 am at The Church of Jesus Christ of Latter-day Saints, 925 N Grape Drive, Moses Lake WA. Burial to follow at Pioneer Memorial Service on Rd 2. https://zoom.us/j/99095250329?pwd=Y1N0aFpLQ3FUVmFRWlpveGt4RjZFQT09 Meeting ID: 990 9525 0329 Passcode: 12345

Third-generation &#8220;Moses Laker&#8221; Calvin David McDowall was born at Samaritan Hospital in 1955 to Harry and Arlene McDowall, when the Columbia Basin was being built out of sand and sagebrush. Raised on a dairy farm like the one of his... View Obituary & Service Information

The family of Calvin David McDowall created this Life Tributes page to make it easy to share your memories.