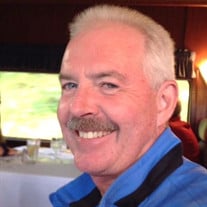 With the passing of Brien Godfrey on October 27, 2017, our family, friends and community have suffered a great loss. Brien was a devoted husband, father and true friend to many. Brien Godfrey was born to Dale & Renee Godfrey on April 7, 1959 in Spokane, WA. He was older by 7 minutes to his twin sister, Brenda and later came sister, Kelly and brother, Kim. As a teenager, he was a proud Boy Scout and obtained the rank of Eagle in 1974. Brien graduated from Central Valley High School in 1977. He attended Spokane Falls Community College prior to moving to Havre, MT where he found his love of flying. Taking hours of lessons, he received his pilot’s license December 1978. Brien moved back home where he was employed by Spokane Ambulance. He went back to school at Spokane Community College, meeting the love of his life, Judi Greenwalt. They married on September 4, 1980 and had their son, Steve in February 1981. They lived in Quincy working on the family farm and in the offseason, Brien took up banking. Eventually moving to Twin Falls, Idaho in 1990, Brien became very active in his community. He was a Chamber member where he was nominated as “Person of the Year’ in 1993 and named “Volunteer of the Year” in 1996. However, one of Brien’s proudest moments was when his son, Steve, earned his rank of Eagle Scout in 1997. Brien moved his family to Moses Lake in 1998, working with Washington Trust Bank for the past 16 years. Brien had many passions in addition to flying. He was an avid water skier and loved their ’79 Glastron Carlson boat. The family spent hours cruising the waters where their son, Steve, also gained a passion for boating. Since moving to Moses Lake, Brien and Judi took up golfing. Starting as just an interest, golfing soon consumed much of their free time. Traveling to different states and Mexico, their clubs were always in-tow. They became members of Moses Lake Golf Club which improved their game but more importantly, created a large network of friends. In 2009, the family grew with the addition of their daughter-in-law, Sheri Zimmerman. Steve and Sheri gave Brien the title of “The Grand Poo-Pa” when his first granddaughter, Ella arrived in April 2012 and their second granddaughter, Nora in February 2015. You could see in Brien’s eyes and hear in his words how much he loved his girls. Brien was an active guy but he and Judi also found relaxation on their back patio, Dutch oven cooking and watching the wildlife. He is survived by his wife, Judi; son Steve (Sheri); and two granddaughters Ella and Nora. His mother Renee preceded him in death. Service at 3pm on Friday, November 3rd at Pillar Rock, 1373 Rd. F.2, Moses Lake with celebration of life to follow. In lieu of flowers, please contribute to your favorite charity in Brien’s name. Sign online guestbook www.kayserchapel.com Arrangements in care of Kayser's Chapel.

With the passing of Brien Godfrey on October 27, 2017, our family, friends and community have suffered a great loss. Brien was a devoted husband, father and true friend to many. Brien Godfrey was born to Dale & Renee Godfrey on April 7, 1959... View Obituary & Service Information

The family of Brien Godfrey created this Life Tributes page to make it easy to share your memories.