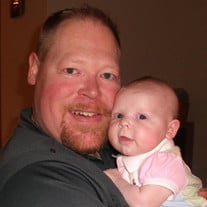 Brian Gregory Robertson Brian was born to Ronald and Karen Robertson on May 25th, 1969 in Ogden, Utah. They later moved to Moses Lake, Washington to raise their two sons Brian and Terry. Brian graduated from Moses Lake High school 1987 and went on to get his AA at Big Bend Community College. Brian met the love of life Kristin in May of 2000 when they were set up by mutual friends. They became inseparable and he became an instant father to three kids Steven, Emily, and ShyAnne. In 2011 Brian and Kristin grew their family by one more with the birth of their daughter Elizabeth. Brian worked as a graphic designer at Budweiser for 16 years until he retired early for his dream job of stay at home dad in 2013. In May of 2017 he added grandpa to his resume with the birth of his grandson Logen. He was later blessed with three more grandchildren Lacie, Oliver, and Alyson. Brian was a loving friend, son, brother, uncle, father, spouse, and grandfather. He loved pickling vegetables from his garden and using his smoker to create delicious meals for friends and family. He was often caught playing his guitars and occasionally putting on a show for his family. Brian passed September 15th, 2021 at the age of 52 in the presence of the love of his life Kristin, his son Steven, and daughter ShyAnne. He was loved by so many and will be greatly missed by family and friends. He was survived by the love of his life Kristin Speed, daughter Elizabeth Roberston, daughter ShyAnne Speed and partner Derick, grandchildren Oliver and Alyson, daughter Emily Speed and partner Nicole, son Steven Speed and wife Ericka, grandchildren Logen and Lacie, sister-in-law Jessica Roberston, niece Kayla Guerra and BJ, great nieces Jaylee and Brynlee, and nephew Aaron Robertson and partner Makayla. He was preceded in death by his father and mother Ronald and Karen Robertson, brother Terry Roberston, and numerous other aunts, uncles, and cousins.

The family of Brian Gregory Robertson created this Life Tributes page to make it easy to share your memories.

Brian was born to Ronald and Karen Robertson...