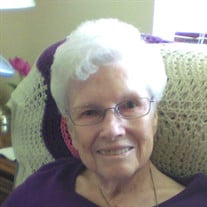 Our sweet mother and grandmother, Bonnie Rue Cox, passed away early Thursday morning, December 12, 2019, at Coventry House in Othello, WA. Bonnie was born September 28, 1929 to Edwin and Sarah Emma Gleed in Delta, Utah. She was the 8th child of a family of 10 children. She grew up in the depression and times were hard. Their family had to move a lot in order for her father to find work and when she was 13 they moved to Ogden, Utah. World War II was going on and at the age of 16 she quit school and she and her sister, Vicky, found a good job at an Army Supply Depot. Later she moved to Shelley, Idaho where her mother and father had moved to and found work there. This is where she met the love of her life, Richard (Dick) Cox, who had just returned from his military service in Japan. They were married June 6, 1947, in Shelley and were later sealed in the LDS Idaho Falls Temple, February 23, 1960. Eventually they moved to Warden, WA where Richard bought a small farm and they raised their 6 children. When their children were grown they tried a small business venture and built a gas station/restaurant in Othello called Waterhole 17. Bonnie will always be known for her great soups, pies and yummy cinnamon rolls. Bonnie was a member of the Church of Jesus Christ of Latter Day Saints. She held many church callings serving wherever she was needed. Whether it was a lesson she was teaching or hot meal to someone in need, it was always something special. She faithfully served until her stroke in October of 2015. Although she didn’t have much growing up and quit school at a young age, she had many talents that came naturally. She had a gift for decorating, whether it was her home, a wedding reception or church activity. She also taught herself how to sew and crochet and was a great self-taught cook. Many of her recipes are well known. Bonnie's favorite love was her family. The family get togethers were her favorite times and she was always proud to show off her family pictures to anyone who came by. Bonnie was preceded in death by her dear husband, Richard Lyle; son, Thomas Harrison; 1 grandson, Garrett Cole; a great grandson, Ryan Olson and a great granddaughter, Lauren Bisnett. Also, 3 son-in-law’s, Scott Cole, Andy Kappel and Richard Bisnett. She is Survived by son Rick Cox (Sharon); Daughters, Lorrie Olson (Ed), Deby Kappel, Sharon Buck (Joe) and Lyn Bisnett. 30 grand kids and 90 great grandchildren and 5 great great grandchildren. One brother, Terry Gleed. Funeral services are under the direction of Kayser’s Chapel of Memories and scheduled for Friday December 20, 2019 at the LDS Church in Warden, WA with viewing at 10:00 a.m., Funeral service at 11:00 a.m. and burial at Sunset Memorial Gardens in Warden.

The family of Bonnie Rue Cox created this Life Tributes page to make it easy to share your memories.

Our sweet mother and grandmother, Bonnie Rue Cox, passed away...