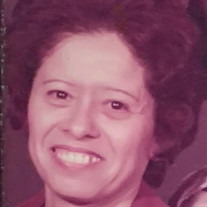 Blanca Alvarado, long time resident of Moses Lake, passed away at Sacred Heart Medical Center in Spokane on Friday February 4th, 2022. Blanca was an amazing wife, mother, grandmother and friend. She was born on July 6th, 1936 in Linares, Nuevo León, Mexico to her parents Julio and María de Jesús Platas. In her young age, along with her five siblings, her parents migrated north and made their home in Coachella, CA where she was raised. She married the love of her life, Alfredo Alvarado in Riverside, CA on November 4th, 1961. Shortly thereafter, the newlywed couple moved north to Mabton, WA but in 1972 Freddie and Blanca moved to Moses Lake, WA. In 1962, they had their first child David and in 1967 they had their daughter Lisa. Blanca enjoyed being a mother to her children and especially a grandmother to her 3 grandchildren, Brandon, Bryan and Mariah. She was very much involved in her church, El Sendero de la Cruz as a Missionette teacher, a Sunday School teacher, part of the women’s ministry and a strong supporter of her nephew Mike when he became the pastor of the church. She loved to do crafts, make quilts and was a world famous tortilla maker! She also loved making apple pies, tamales and her famous banana nut bunt cake for church fundraisers. For many years she worked at Samaritan Hospital as a housekeeper and eventually retired in 2002. She loved family outings and road trips with her children and with her extended family.   Blanca is preceded in death by her wonderful husband of 59 years, Alfredo, her parents, Julio and María de Jesús Platas, her sisters, Guadalupe Aranda, and Rebecca Platas. She is survived by her children, David (Natalie) Alvarado and Lisa (Larry) Sanchez and her three grandchildren, Brandon, Bryan and Mariah. She is also survived by her siblings, Juan Pablo Platas, Dolores Medina and Jose “Rito” Platas.   The family would like to especially thank the wonderful nurses, doctors and staff at Sacred Heart for their compassionate care while Blanca was in the hospital. Blanca will be missed greatly by all of her family and friends but we rejoice that because of her great faith, she is now in the presence of her Savior, Jesus Christ.

The family of Blanca Alvarado created this Life Tributes page to make it easy to share your memories.