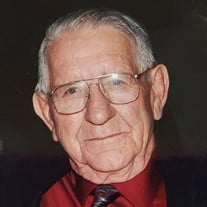 Blaine Adelbert Brown was born January 6, 1929 in Rupert Idaho to Pete and Iris (Sorensen) Brown. Blaine graduated from Richfield High School in 1947. Shortly after graduation, Blaine moved to Spokane Washington with his folks where he worked on the family-owned dairy, raising dairy cattle and pigs. While in Spokane, Blaine met and married Dorothy Brischle in 1950. Blaine and Dorothy raised four children and eventually moved to Moses Lake for a few years before settling in Royal City Washington in 1959. Blaine farmed and opened a fruit stand at Brownies Korner in 1974 which was later converted to one of the first mini-marts in the area that also had a gas station. Blaine married his life-long companion Janet Smith in 1989. One of Blaine’s greatest accomplishments, besides his family, was purchasing farmland on the Royal Slope. Blaine broke it out of sagebrush, leveled and developed the land. He will be remembered for his love of farming, strong work ethic, operating of large equipment and sharing various stories. He also enjoyed dancing, cards, snowmobiling, family and an occasional slot machine. Blaine retired at the age of 80 and retirement didn’t slow him down much. His daily routines after retirement was to have breakfast and head outside to water plants and flowers, spray or hoe weeds, check on the farm and irrigation, and ensure there was a general well being with his family. Blaine was a charter member of the local Moose Lodge and served as governor for a few years. Blaine also served on the Weed District and on the Royal City Cemetery Board. He was a Community Days Grand Marshall and became a member of the Royal City Nazarene Church in 1998. Blaine loved his role as the church greeter on Sunday mornings providing a smiling face and a warm hug. Blaine passed away January 20, 2021 in Moses Lake Washington. He is survived by his wife Janet, son Mike Brown, daughter Rhonda Davis, son Spud (Bonney) Brown, daughter Sheri (Jake) Jacobsen, stepson Darin (Angie) Smith, stepdaughter Dawn (Dick) Woodward, stepdaughter Debra O’Neel, stepdaughter Darla Aarlie, 34 grandchildren, 58+ great grandchildren and three great great grandchildren. A private service for the family will be held January 29 in Royal City with interment at the Royal Memorial Gardens. He will be watching over the crops until we meet again.

Blaine Adelbert Brown was born January 6, 1929 in Rupert Idaho to Pete and Iris (Sorensen) Brown. Blaine graduated from Richfield High School in 1947. Shortly after graduation, Blaine moved to Spokane Washington with his folks where he worked... View Obituary & Service Information

The family of Blaine Adelbert Brown created this Life Tributes page to make it easy to share your memories.