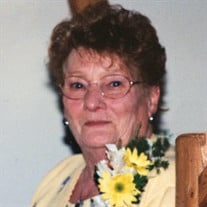 Betty Bernice Valline-Nichols of Moses Lake went to be with her Lord July 15, 2018, after a long struggle from a painful surgery. She was surrounded by three of her children and a step-grandson. Betty was born in Osage, Minnesota July 11, 1929 and the daughter of Ethel DeliaThomas-Valline and David Howard Rue/Valline. Preceding in death was her husband, Reid Nichols, two sisters Ada May, Eileen Davine and four brothers Douglas H., Wesley T., Wardell W. and Dean O. She is survived by one sister, Dorothy Elaine Monnet of Idaho. She leaves behind her four children, Arloa E. Gilmore of North Bend, WA., Reida B. Nichols-Wegman, spouse Terry of Leavenworth, WA., Peggy D. Guenther of Port Richey, FL. spouse Chuck, Lyle D. Nichols of Moses Lake, WA. She had 10 grandchildren, 8 great grandchildren. Betty married the love of her life Reid Nichols of Kent, WA, they moved to Seattle WA, then to Kirkland WA, where Betty worked for Thriftway, then returned to Seattle . She retired from Safeway as a meat wrapper. Soon they picked up again and moved to Monroe ,WA. Once again they moved, to Coulee City, WA. The last move was to Moses Lake, were she lived out her life. She loved life, her children, and grandchildren. She enjoyed life to the fullest. She taught family values, and did many family get-together's as she was known for her cooking. She leaves a hole in our hearts but we know she is enjoying the Anniversary Waltz with her husband. We would like to express our appreciation to everyone who touched her life, including Hospice who took such careful care of her. And to Bob Shepherd her step grandson who has been by her side for 3 years as her caretaker, bus driver, run around guy and casino partner. A Celebration of Life will be Saturday, July 28th at 1:00 pm at MarDon Resorts, 8198 HWY 262 SE, Othello, WA. 99344 In Lieu of Flowers donations may be made to Assured Hospice, 1417 S. Pioneer Way, Moses Lake, WA 98837

Betty Bernice Valline-Nichols of Moses Lake went to be with her Lord July 15, 2018, after a long struggle from a painful surgery. She was surrounded by three of her children and a step-grandson. Betty was born in Osage, Minnesota July 11,... View Obituary & Service Information

The family of Betty Nichols created this Life Tributes page to make it easy to share your memories.

Betty Bernice Valline-Nichols of Moses Lake went to be with her...