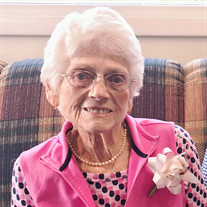 Betty Lybbert, beloved mother, devoted grandmother, faithful friend, nurturer, and dedicated member of The Church of Jesus Christ of Latter-Day Saints, passed away on Monday, April 22, 2019. She was 93. Kathaleen Betty Thomasene Graham, the youngest of six children born to Gracie Belle Scrivener and Herbert William Graham, on the banks of the Columbia River in White Bluffs, Washington near the Tri-Cities. The family lived and farmed in the Methow Valley and Wenatchee until her parents moved to the Hiawatha Valley in Moses Lake in 1940. In 1944, Betty graduated as the valedictorian from Moses Lake High School and attended Washington State College (University) that fall. After two years at WSU, Betty took a job with the Operating Engineers, working as the union’s hiring manager for the O’Sullivan Dam construction project. She was responsible for hiring all the employees who built the dam—from engineers to laborers. While working in a potato sorting shed, Betty was introduced to Forest Lybbert, who was on leave from Sand Point Naval Air Station in Seattle. Forest was visiting his parents, who had moved to Moses Lake from Vernal, Utah during the war. After what Betty described as their “whirlwind courtship,” Forest and Betty married in the Presbyterian Church in Moses Lake on April 27, 1947. They established themselves in Moses Lake, where they made a life for over 70 years. Betty and Forest were sealed in the Cardston Alberta Temple on September 29, 1960. Betty was a mother to seven children, one of whom was stillborn and nearly cost her life; the Washington State Patrol couriered blood from Yakima to save her. Also part of her family are niece and nephew Shelly and Rodger Graham. “Aunt Betty” was one of her most cherished titles. She was the glue for her extended family, hosting family dinners and activities for most of her life. Betty had many creative talents. As a child, she made clothes for celluloid dolls and later progressed to sewing and knitting. Of that time she said, “I grew up with a needle and thread in my hand.” In her 50s, she learned to quilt. The Grant County Fair, the Odessa Quilt Show, and Moses Lake Quilt Show recognized her creative talents with many awards. During the last year of her life, she gave away nearly fifty quilts, many of which she made in the last decade. She planted beautiful flowers and all her friends and family enjoyed her bounteous garden. She loved to preserve the best fruits and vegetables from around the Basin. If her husband or sons were on a tractor or combine somewhere, Betty always appeared at an opportune moment with a jar of peaches, a sandwich, and a piece of cake wrapped in wax paper. The same was true at the “brown bag room” at Mission Ridge. At lunchtime on the ski hill, she could be found pouring hot tomato juice, handing out sandwiches and walnut spice or chocolate cake. Betty attended various churches in Wenatchee, but knew little of The Church of Jesus Christ of Latter-day Saints. As Forest became converted to the gospel of Jesus Christ, Betty was supportive and they attended church together with their growing family. In 1959, her spiritual roots deepened and she was influenced by family friend, David Stevens, to accept Christ’s invitation to “Come unto Him.” She was soon baptized and confirmed a member of the Church. She put her hand to the plow and never looked back. Forest and Betty always planned to serve a mission together. Starting in December 1996, they served an 18-month mission in London, England. They loved the diverse and international Saints with whom they associated. In her family life, she was a willing participant on the ski hill and on the lake, water skiing behind the green boat and making her way down the groomers at Mission Ridge. In 1965, she sacrificed her long-awaited dining room so her family could take up snow skiing. However they did build the dining room ten years later. In her own words, she “loved everything and everybody” and “was game for about anything.” Forest and Betty were a great team; whatever direction they were moving, they moved together. Over the past several years, their eldest daughter, Thomasene, lived with Betty and Forest. Thomasene’s selfless and generous service to her parents and siblings blessed their lives immeasurably and enabled them to stay in their home. Betty and Forest never spent an anniversary apart, including their 72nd anniversary, which was Saturday, April 27, 2019. Betty is survived by her children, Thomasene Lybbert of Moses Lake; Dale and LeeAnn Lybbert of Moses Lake; Rodger and Kay Graham of Provo, Utah; Scott and Teri Lybbert of Kennewick; Tracy and Jill Lybbert of Pasco; Shannon and Bill Low of Denver, Colorado; Shelly Hutchinson of Moses Lake; and Mark and Marion Lybbert of University Place, Washington. Forest and Betty have 28 grandchildren and 62 great-grandchildren. Funeral services will be held at The Church of Jesus Christ of Latter-day Saints at 1849 Nelson Road NE at 11:00 a.m. Monday, May 6, 2019. There will be a viewing at Kayser’s Chapel from 5:00 to 6:00 p.m. Sunday, May 5, 2019. Additionally, there will be a viewing from 10:00 to 10:40 a.m. at the church before the funeral service.

The family of Betty Lybbert created this Life Tributes page to make it easy to share your memories.