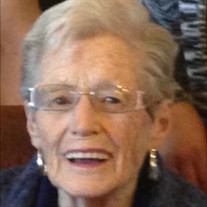 Betty L. Kurkowski entered into rest December 24, 2016 in Moses Lake, WA. She was born in Chelan, Washington March 29, 1931. Betty was the oldest of then a sister and brother. Later in life she was joined by another brother and sister. While attending high school in Lind, Washington, Betty worked for a dry land farmer as a cook. It was at this job that she met Joe Kurkowski in the summer of 1947. The couple married in 1948. Joe and Betty dryland farmed in the Warden area. In 1951 Joe Jr. was born and a short time later they moved to Minnesota where daughter Teresa was born. Betty didn’t like the cold Minnesota weather so they came back to the Warden area. This is where in 1954 daughter Roxanne was born in Moses Lake, Washington. A little over a year later while living in the Hayden, Idaho area daughter Ruth was born. Later being drawn back to Warden the family put down roots for good. Betty’s love of cooking led her to various jobs cooking in Warden. It seemed Betty and Joe always had company of friends and relatives. There were card parties, hunting gatherings and nights out dancing until the music ended, for all the events Betty was cooking a meal for everyone. When Joe and Betty retired they went to Alaska where Betty cooked for the crew in her son-in-law's fish processing camp. They both enjoyed their time in Alaska. Betty and Joe did some traveling to Arizona, California and other places visiting friends and family. Soon they settled in to enjoy the expanding family of grandkids and great-grandkids. Betty loved doing for all the kids, making blankets and of course cooking for everyone when they came over. Later, due to health reasons Betty and Joe moved to Hearthstone in Moses Lake, WA. Betty was preceded in death by her husband Joe, daughter Teresa, great-grandson Clayton Clark, son-in- law Robert Dasch and 2 brothers, Tommy and Lloyd. She is survived by son Joe Kurkowski Jr. (Patti), Warden, daughter Roxanne Clark (Mark), Warden, daughter Ruth Dasch, Ritzville, 3 grandsons, Kerry Kurkowski (Nichole), Battle Ground, WA., Eric Clark, Moses Lake, Travis Clark (Jody), Moses Lake, 2 granddaughters, Stacie White (Steve), Spokane, WA., Angela Clausen, Rodeo, CA., 7 great-grandchildren, Madisyn Clark, Maycee Clark, Kylie White, Brock Clark, Brooklyn Clark, KayeLynn Kurkowski, Joey Kurkowski and 2 sisters, Georgina and Sharon. Services will be held at Queen of All Saints Catholic Church in Warden at 2 p.m., Friday, January 6, 2017 A graveside service will be held afterwards at Sunset Memorial Gardens Warden, Washington.

Betty L. Kurkowski entered into rest December 24, 2016 in Moses Lake, WA. She was born in Chelan, Washington March 29, 1931. Betty was the oldest of then a sister and brother. Later in life she was joined by another brother and sister. While... View Obituary & Service Information

The family of Betty L. Kurkowski created this Life Tributes page to make it easy to share your memories.