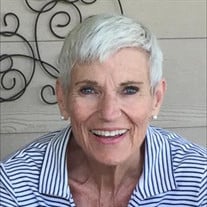 Bette Lou McAtee It is with heavy hearts that we share the passing of Bette, a beautiful wife, mother, Nana, and friend. God brought her home on Wednesday, May 10th after a year-long battle with cancer. She was 74 years young. While Bette spent most of her childhood in Spokane, she was born in McMinnville, Or. on August 15, 1942. She was the second daughter of Orville and Marion Garst. Bette was a hard worker and had her first job at the age of 12. She became a legal secretary at 18 while attending Eastern Wa. University. It was 2 years later that she met the love of her life, Bert. They were married a year and a half later on June 13th, 1964 and honeymooned in Canada. Bert and Bette built a beautiful life together here in Moses Lake. Shortly after buying their first home on Northshore Drive they welcomed their daughter, Shelley, in April of 1967. Their family grew in May of 1969 when their son Michael was born. A few years later the family moved into their home on Wenatchee Drive where the door was always open to friends and many wonderful memories were made. Bette’s family remembers the years she spent dedicated to her husband and children creating a wonderful home and environment for them to grow and flourish. And they did. Her children were both married in back yard weddings at their family home. Bette really enjoyed the sun and the outdoors. During the summermonthsshe would work long into the evenings tending to her flowers. Family vacations to Palm Springs, Hawaii, and Mexico helped her get her sunshine fix during the winter months. Bette was also an active member of the Miss Moses Lake Pageant Committee, and it was during those years that she was known for hostingpoolside and holiday parties. Bette and Bert enjoyed golfing so much that they eventually downsized and built a home on the golf course in 2004. This allowed them to spend more time traveling the country in their motorhome. Bette was also a lover of Jazzercise. She loved the dance, the music, and the many close friends she made there. This was something she truly missed when she was too weak to go. Everyone who met Bette remembers her radiant smile,boundless energy, and giving nature. She adored her 3 grandchildren and loved talking with them about school, their friendships, sports and hobbies. Always supportive and encouraging, always wise and kind, that’s how she will be remembered. Bette is survived by her husband: Bert; her sister: Beverly; her children: Shelley and Michael; her grandchildren: Emily, Trey and Elliot; her daughter-in-law: Monica; and her son-in-law: Kevin; as well as her niece and nephews. Bette’s celebration of life will be held Friday, May 19th at 2:00pm at the Moses Lake Presbyterian Church, 1142 W Ivy Ave., Moses Lake, Wa. with a reception to follow. In lieu of flowers, donations can be made to the Moses Lake Cancer Foundation. Sign online guestbook at www.kayserschapel.com

Bette Lou McAtee It is with heavy hearts that we share the passing of Bette, a beautiful wife, mother, Nana, and friend. God brought her home on Wednesday, May 10th after a year-long battle with cancer. She was 74 years young. While Bette... View Obituary & Service Information

The family of Bette Mc Atee created this Life Tributes page to make it easy to share your memories.

Bette Lou McAtee
It is with heavy hearts that we share the passing...