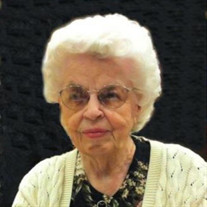 Beth Garn Burnett (99) passed away peacefully on Thursday, Sept. 9, 2021 in Moses Lake, Washington. She was born on August 23, 1922 in Fielding, Utah to Wesley J Garn and Florence Doman Garn. She married Ernest Burnett on May 14, 1943 in Logan, Utah. Beth and Ernest were separated by World War II when the Navy drafted Ernest on Dec. 7, 1943. While her husband served in the Navy, Beth was employed at City Drug in Tremonton, Utah. They reunited when he was honorably discharged March 17, 1946. In April of 1953 Beth moved with her husband and two young sons to Moses Lake, Washington. Ernest was employed by U & I Sugar Company. Beth was a devoted wife and mother to her family that grew with the addition of two daughters. Beth loved music and always had records playing on the stereo. She enjoyed sewing, crocheting, quilting and baking. Her grandchildren meant the world to her and anytime they came for a visit they would be treated with banana bread, cookies, or Ritz crackers with melted cheese. Beth even had a special ice cube tray that made small square ice cubes and she filled cups of ice for the grandkids to crunch on for their ride home. She found ways of taking simple things and making them seem extra special. Beth was a member of the Church of Jesus Christ of Latter Day Saints and served in various positions including librarian, Relief Society Secretary and Temple Worker. She was a living example of rendering Christ-like love through service to her family and others. She is survived by her children, Neal E Burnett (and wife Terry) of Moses Lake, Washington, Larry J Burnett (and wife Joann) of Kent, Washington, Leslie (Burnett) Riggs (and husband Mark) of Palisades, Washington, and Nancy (Burnett) Hyer (and husband Chris) of Moses Lake, Washington; 12 grandchildren, 37 great-grandchildren and 9 great-great grandchildren; two sisters, Jean Nye of Issaquah, Washington and Dayle Stimpson of Fielding, Utah. Beth is preceded in death by her parents; husband; brother, Jack Garn; sisters, Rae Peterson, Carol Hess, and two sisters who died in infancy. There will be a graveside service at Guarding Angels Cemetery, 2595 Rd. L NE, Moses Lake, Washington on Friday September 24th at 11:00 am. The Burnett family wish to express sincere thanks to the Staff at Summer Wood Alzheimer’s Special Care Center and Assured Hospice for their caring service.

Beth Garn Burnett (99) passed away peacefully on Thursday, Sept. 9, 2021 in Moses Lake, Washington. She was born on August 23, 1922 in Fielding, Utah to Wesley J Garn and Florence Doman Garn. She married Ernest Burnett on May 14, 1943 in Logan,... View Obituary & Service Information

The family of Beth G Burnett created this Life Tributes page to make it easy to share your memories.