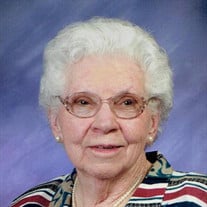 Bernice Russell was born on September 10, 1921 in Eltopia, WA to Tony and Minnie Hoffman. She was raised on a dry land wheat farm East of Connell, WA. As a child she hated being inside doing housework and getting bossed around by her older sister. She would rather be outside with her dad working around the farm. So she did. Even at an early age she was fiercely independent. One of the things she was most proud of was the time she got to run the header. This was on a combine pulled by a team of 18 or more horses. The header operator raised or lowered the big mower by turning a wheel like a steering wheel. Set at the proper height, the mower would cut off the heads of the wheat, but as the fields were rarely flat the height had to constantly be adjusted or the big header would plow into the ground. Not everyone got to run the header wheel. Another thing she was proud of was working in the engine shop at Boeing during the war. They needed workers who had experience with tools. She told them she knew about tools and proved it to them. She was given the job of attaching carburetors on B-17s, one of the few women to work in the engine shop. It was at Boeing she met her future husband and lifelong partner George Russell. Together, they raised a family and built a legacy of which she was the most proud. Nothing was more important to Bernie, as everyone came to call her, than God and family. And you didn’t have to be one of her children to be family. She once drove herself to Ephrata to bail a young dishwasher out of jail for doing something stupid. He was the same one she was always chastising for being late or not working up to her standards. But woe to anyone who messed with her family. Bernice attended EWU for two years but had to quit early to work on the farm. Eventually she moved to Seattle where she met and married George Russell. After the war they bought a neighborhood grocery store and meat market in the Wedgewood District of Seattle. They loved to golf and spent many happy days on the courses around Seattle. When it became evident a Safeway was to be built across the street they looked for other opportunities. Somehow they chose to build a bowling alley. According to Brunswick, the best choices were Anchorage Alaska or the supposed upcoming boom town of Moses Lake. So in 1957 they built a 16 lane modern Bowling Center, the term alley was not liked at that time. After all this was a modern center with air conditioning and the new automated pinsetters! Together they raised a family and ran the family business until the sudden death of her beloved husband George 1n 1978. Bernie continued to run the business with her family into her 90s, the first to arrive every day. Unfortunately, though she was incredibly active, mowing the lawn , gardening, caring for grandchildren, doing bookwork, checking up tills, reading and doing crossword puzzles, all the things one is supposed to be doing for mental health, she developed dementia in her mid 90s. At the age of 100, our beloved mother went to heaven to join Jesus and her beloved George, whom she had missed so terribly for so long. She is survived by her children, Beverly Duzon (Henri), Bob Russell (Sherry), Bruce Russell (Marjean), Randy Russell (Linda), and Terri Brice (Bill), 13 Grandchildren and 18 Great Grandchildren. Many thanks to Daisy MeKonen and family for the loving care they provided our Mom. A graveside service will be held at Pioneer Memorial Garden on Tuesday March 29, 2022 at 2 pm. Following the service will be a Celebration of Life at the Lake Bowl/Ten Pin restaurant. In lieu of flowers, please make donations to the Alzheimer’s Assoc.

Bernice Russell was born on September 10, 1921 in Eltopia, WA to Tony and Minnie Hoffman. She was raised on a dry land wheat farm East of Connell, WA. As a child she hated being inside doing housework and getting bossed around by her older... View Obituary & Service Information

The family of Bernice Russell created this Life Tributes page to make it easy to share your memories.